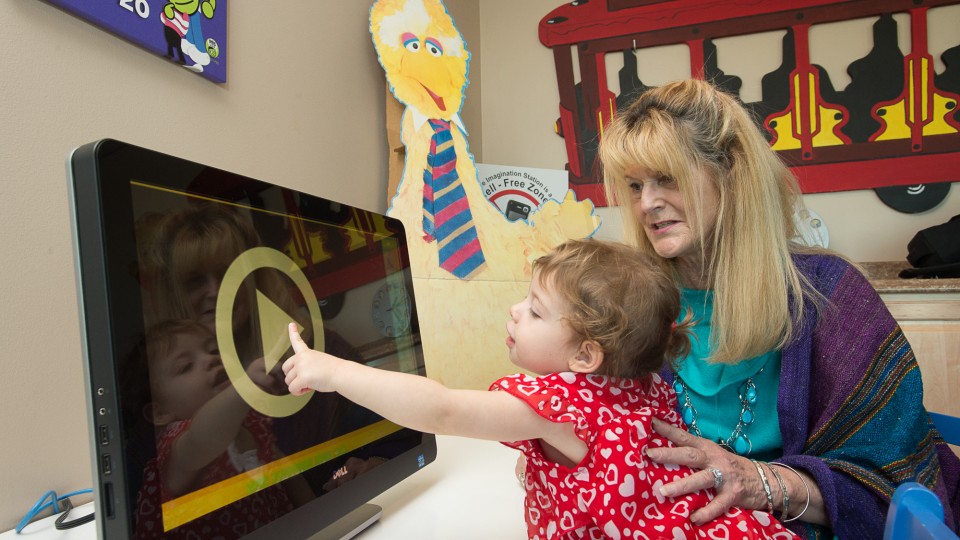 “Your child has a behavioral problem. Good luck with her!” The childcare director told me these surprising, abrupt words as I walked out the facility for the last time. This was Oct. 8, 2009, the day I moved with my family to Pensacola.

What was going on? I had no clue nor had I seen any disturbing pattern in my child’s behavior before that day. My daughter, Vivian, was just a few weeks short of being 2 years old.

Our family moved into a hotel room for five weeks while my husband began his new job as I.T. manager for the Navy at Corry Station. I stayed at home with our daughter until we could find a home and settle into our new community.

Soon I began to wonder if my child had behavioral issues as the day care director had suggested. Every day I witnessed her tantrums. No matter where we went or what we did, my daughter did not seem happy or adjusted.

Then one night in our tiny room, our family was playing on the floor. My husband began drawing circles on a sheet of paper. He showed Vivian and began teaching her how to do them. She was mesmerized. Her small hands began scribbling circular objects all over sheets of paper.

My mother-in-law had sent us flash cards with animals and objects on them. I pulled those out and began using them to communicate with Vivian. She wanted to do them over and over again. When she learned the names of pets and household items, she would beam with pride.

Something in me clicked. My daughter was trying desperately to communicate with us but I hadn’t really noticed the signs for help until then. Finally I “tuned in” as Dr. Dana Suskind details in her book “Thirty Million Words: Building a Child’s Brain.” I was ready to pay attention after that.

Suskind explains how critical parent talk, words and nurture are to a child’s life, especially in the first three years.

Suskind says, “The brain is almost entirely dependent on what it encounters on its ride to full development.” In other words, the environment a baby is exposed to for those first three years with a caretaker can determine the child and adult achievement level later on.

Besides “food necessary for physical growth,” Suskind says, “there is an equivalent need for optimum social nutrition to ensure intellectual growth. Both needs are dependent upon the caretaker.”

I had hit the two-year mark in October 2009 with my child. Suskind’s book was not published yet to guide me then, but thankfully I intervened with a vengeance. My gut told me to do something and just in time. Previously my patterns had been to keep quiet, to ignore, or worse, simply blame my child for the daily outbursts.

I began to “talk more” than I ever had before with my child as Suskind encourages parents and caregivers to do. I narrated everything I was doing. We went for walks along Pensacola Bay with her in the stroller.

“Look at the blue sky!” I’d say.
“The sun is so bright and gold today.”
“We are walking along the bay.”
“I see two birds and a pelican overhead.”

I pointed out the groceries I bought in the store. I explained to Vivian what tall, short, up and down meant. We looked for shapes like octagons for stop signs and triangles for yield signs.

My daughter became my shadow. I brought everything to life for her as I shared every detail about the lives we were living in the moment.

After six months, I noticed my daughter’s fits were less frequent. She began talking more. Or perhaps I was just more “tuned in” as a better listener. We started having two-sided conversations.

We could “take turns” as Suskind suggests. She pointed her finger toward an object or word. Then I responded with the title or meaning for her. When I was tired at the end of a day, my husband would step forward to interact. Thus we took parenting turns so we could maximize educational opportunities.

By 2010, my whole mindset changed. I began to look at the world from the eyes of eager kids. My daughter was a sponge ready to soak up knowledge. We’d push and pull objects around the house and use action verbs to describe what we were doing. In our backyard, we walked backwards then forward. All along the way, we were describing, storytelling and learning. When my daughter turned three years old, she was a happier, more adjusted and very talkative kid.

Almost two years later, Vivian’s little sister Lana entered the world. I began my language intervention right away. On the first day in our home, I held Lana and walked her around every room in the house. I introduced her to the bed, our dog, the refrigerator, window, front door, kitchen table, bathtub, swing and anything that came across our path.

I remember how her big eyes were intrigued by it all even if they could not quite focus at that early stage. Still she was listening. She was paying attention, even as a newborn, just as Suskind reveals in her book.

Lana has had a much easier time during her first three years. She is now 4 years old and has a bigger vocabulary than most children. I know this is because I was more “tuned in” to her needs after my previous mistakes. In addition, she has a very chatty big sister around to help narrate life.

I am grateful for two talkative, healthy daughters in my life now. Reading Thirty Million Words recently reminded me of how I stepped in at just the right time to help my oldest child in her development. Would Vivian have made straight A’s in second grade this past year had I not tuned in to see her struggles to converse?

I am delighted to see Quint Studer and the Studer Community Institute dedicated to improve the early learning efforts of our region and beyond. With the Be the Bulb challenge and the recent trademark of Pensacola being “America’s first early learning city,” I know our area is on the right track to developing our youth for lifelong chances of success. Investing in early learning is a true investment for our city’s future.

Mandy B. Fernandez is a writer living in Pensacola. She writes creatively and professionally on topics such as business, education, creative arts, health, family life, parenting and natural foods.  She is working on her first children’s book. You can learn more about her at www.writtenbymandy.com.