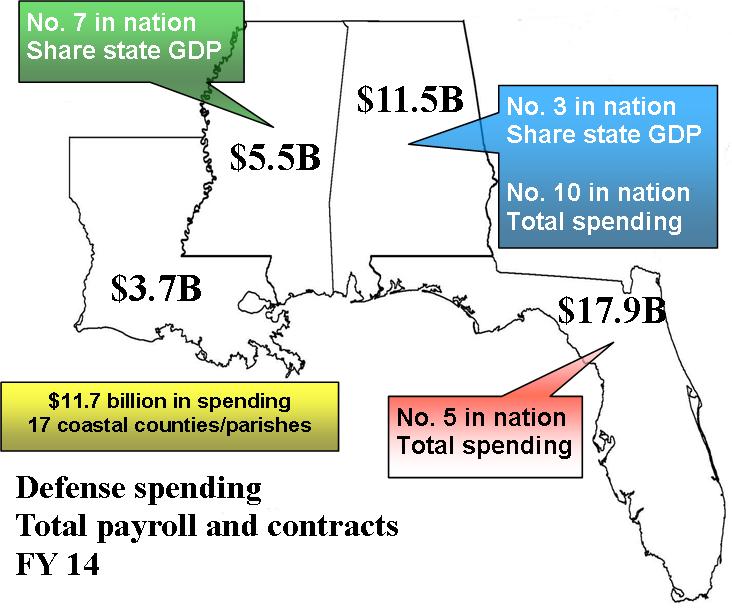 When it comes to defense spending, every state takes a back seat to Virginia, whether it’s total spending or spending as a portion of the state’s Gross Domestic Product.

But Alabama, Florida and Mississippi are among the top states in defense spending in several measures. And while the state of Louisiana is in the middle of the pack, several parishes in Southeast Louisiana are also hot spots for defense spending.

The Department of Defense in September released its Defense Spending by State Fiscal Year 2014 report, which examines defense spending at the state and local levels for all 50 states and the District of Columbia.

It showed DoD spent $418 billion on payroll and contracts in the United States, about 2.4 percent of GDP. On a per capita basis, that’s a spending level of $1,312 per U.S. resident.

Of the four states that have a portion of the I-10 aerospace corridor, Alabama is most reliant on the military. It has the largest percentage of its GDP dependent on military spending -- 5.9 percent. That’s third highest in the nation after Virginia (11.8 percent) and Hawaii (9.9 percent).

The majority of Alabama’s DoD spending, 61 percent, is in North Alabama’s Madison County, location of the Huntsville military-industrial complex. That single county accounts for $7 billion in defense spending, sixth highest in the nation among counties.

Mobile County in South Alabama is the No. 2 defense spending location in Alabama thanks to the heavy shipbuilding activity at Austal.

The complex on the Mobile River is Alabama’s top contractor, where $991.4 million was spent in 2014. Austal builds littoral combat ships and fast ships for the United States Navy.

In Mississippi, 5.1 percent of the state GDP relies on military spending, seventh highest in the nation. The three coastal counties that are part of the I-10 aerospace corridor, Jackson, Harrison and Hancock, are among the top 10 locations in the state for DoD spending.

Jackson County, home of Huntington Ingalls Shipbuilding and VT Halter Marine, accounted for $2.6 billion in spending, highest in the state, while neighbor Harrison County was second highest, with $700.6 million. To the west, Hancock County was 9th highest with $83.3 million in spending.

Harrison County the top personnel location with 10,551, and Jackson County is third with 2,219.

In Florida, 2.2 percent of the state’s GDP relies on military spending, 26th highest in the nation. But the $17.9 billion in defense dollars spent in the state, 4.3 percent of the U.S. total, puts Florida at No. 5 in the nation in total dollars. Only Virginia, California, Texas and Maryland spent more.

The state’s top contractor was Lockheed Martin, accounting for $2 billion in spending. Because of the state’s large population, the amount spent per resident is $898, well below the national average of $1,312.

Although Louisiana is ranked 30th in proportion of GDP attributed to the military and No. 28 in actual defense dollars spent, there are six parishes in Southeast Louisiana that are in the top 10 parishes as spending locations, according to DoD.

Second highest is in Orleans Parish, where $758.6 million was spent. Orleans Parish also is the top location for DoD personnel in the state, with 10,254. The state accounts for .9 percent of total defense spending, $786 per resident.

Gulf_Coast_Aerospace_Corridor.com is a website created in 2008 to highlight aerospace activities along the Interstate 10 corridor between New Orleans and Northwest Florida. It includes reference material, job postings, a daily aerospace newsfeed and weekly column. In 2011, the website teamed with several journalists to create the Gulf Coast Reporters’ League, which writes and publishes an annual book about aerospace in the region. The first book was published in June 2011. In September 2013, the League launched an eight-page quarterly aerospace newsletter, which became a bimonthly in August 2014 after the League published the fourth edition of the annual.

All the books can be found at: www.gulfcoastaerospacecorridor.com/gcacbooksall.html;

and all the newsletters can be found at www.gulfcoastaerospacecorridor.com/gcacnewslettersall.html.