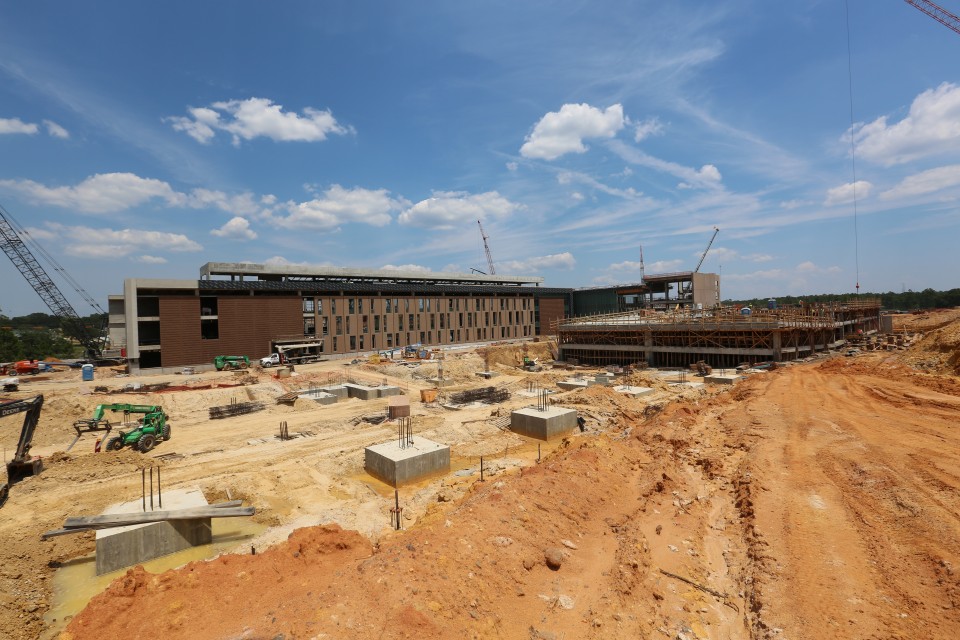 The credit union represents one of the largest employers in the metro area, paying wages that top the market’s current average with the pledge to create thousands more jobs as they expand, improving the quality of life in the Pensacola metro area.

Already big with 4,200 employees, including 700 working off campus in the Pensacola area, and four existing buildings totaling 600,000 square feet, Navy Federal will become much bigger when a Phase 1, $245 million expansion is completed in July 2016.

That project, which reached the halfway point in August, will bring on line two huge office buildings with a combined 400,000 square feet of floor space.

By comparison, Gulf Power's corporate headquarters on Bayfront Parkway is 225,000 square feet, just slightly larger than either Building 5 or 6.

Both Buildings 5 and 6 will provide working space for another 2,000 employees, said Debbie Calder, Navy Federal's executive vice president in charge of Pensacola operations.

And while Calder is pleased with the progress so far, she is no less anxious to be handed the keys to both buildings.

"It can't all be finished soon enough," she said.

Building 5 will be the first of the two buildings now under construction to go on line next May.

On Day 1 Calder's staff will begin the process of moving the first group of those 2,000 workers into Building 5. 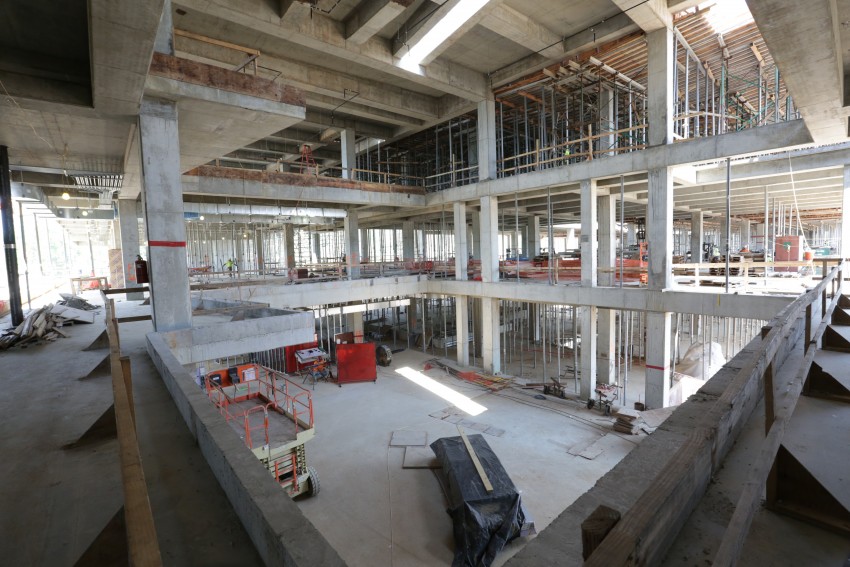 This will be the commons area of the building under construction at Navy Federal Credit Union's Beulah campus.

Next July, Building 6 will open for business and Calder expects both buildings will be fully occupied very quickly.

"We're overloaded on this campus right now by about 500 employees," she said. "So we will move some of our people from Building 2 to our new Building 5 as soon as it's ready. We have a property over in Milton that we're leasing, and we will bring those employees back on our campus," she said.

Together Buildings 5 and 6 will house 2,000 individual work stations that will be manned round the clock, seven days a week.

When Navy Federal will get even bigger

But as impressive as Navy Federal Credit Union’s Phase I expansion will be, it's just a prelude to what's to come later this fall.

That's when Navy Federal's Phase 2 Expansion gets under way.

"Construction for Phase 2 is expected to get under way by October or November of this year," said Kim Aderholdt, Navy Federal's project manager for both Phase 1 and 2. Completion of Phase 2 construction is anticipated in the first quarter of 2019.

And to put the enormous size of Phase 2 in perspective, the two buildings with a combined 1 million square feet, will equal the size of Buildings 1, 2, 3, 4, 5 and 6.

Once Phase 2 is completed and the office buildings occupied, the Navy Federal's total capital investment at the Beulah campus will exceed $1 billion.

Its eight office buildings, when completed, will occupy 2 million square feet of office space and house more than 10,000 workers, making it by far the largest private employer in Northwest Florida.

Changing the community in more ways than one

Navy Federal’s influence is not only the sheer number of employees they have. Read more here about how the sleepy community of Beulah is changing already because of the credit union.

The credit union’s Pensacola operation pays average salaries of $45,000+, more than $6,000 above the current average salary of the Pensacola metro of $38,558.

Its impact ripples beyond its massive influence in the labor force.

Escambia County Superintendent Malcolm Thomas has announced plans to build an elementary and middle school in the central part of the county, in part to meet the anticipated educational demands of those Navy Federal families.

The company has cultivated a cachet among millennials for a work culture that cultivates collaboration, training and coaching. It is a standing that is especially important to a company whose millennials employees composed 44 percent of its workforce — and 38 percent of its members nationally.

Florida DOT has funded and scheduled the start of the work — four-laning Nine Mile east from Navy Federal’s entrance to Interstate 10 — for fall 2016.

A second phase that will four-lane the road west to Beulah Road and beyond.

"The project may or may not be phased," said Navy Federal spokesman Bill Pearson. "They have the project broken up into segments, but we do not know which will go first or if they will build all at once."

Expected completion of both projects is mid 2018.

"We know the traffic situation out here will cause some frustrations," said Calder. "We are staying in close contact will FDOT to make sure the four-laning of Nine Mile Road stays on schedule. 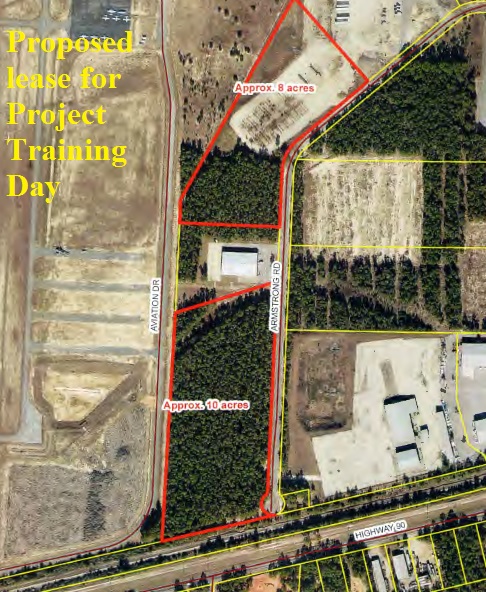 "We went to FDOT a couple of years ago and told them this expansion was going to create traffic management problems for us," Calder said. "And I will say FDOT has been a great partner in this and very supportive, as have Gov. (Rick) Scott and Senator (Don) Gaetz, and all of our legislative delegation."

The 4-H property was owned by the 4-H Foundation of Escambia County. It is immediately adjacent to Navy Federal's existing 68 acre site where Buildings 1, 2, 3 and 4 now sit.

The 4-H Foundation used the $3.8 million to purchase another site for its agricultural activities, and also received from Escambia County a $1.5 million building situated on 23 acres at the Escambia County Extension Service on Stefani Road.

Gaining that land paved the way for Navy Federal to give the go-ahead for the $840 million expansion that will bring some 7,000 new jobs to Escambia County by 2020, said Cutler Dawson, Navy Federal's chief executive officer.

"One of the things that we committed to 4-H when we bought the property was that we would help build a memorial to Dr. Langley Bell at the lakeside," which will include a bench and a memorial sign, Calder said.

The late Dr. Bell was the father of the 4-H Center and donated the land to the foundation in the late 1940s.

Calder said she is also proud of the number of local subcontractors who are working on Phase 1 under Colorado-based general contractor Hensel Phelps. They include: Baroco Electric, Pensacola Glass, and Nelson Plumbing.

Borman Masonry out of Fort Walton Beach has the contract for all brick work and masonry.

Navy Federal's Phase 1 and 2 by the numbers: