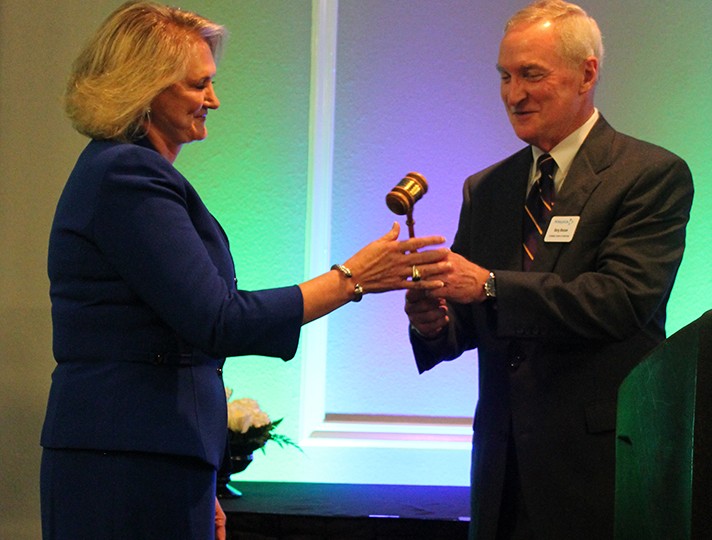 The event featured a commemorative year in review, as well as the official passing of the gavel from past Chamber Board of Directors Chairman Gary Huston to current Chairwoman Carol Carlan, the president of Sacred Heart Foundation.

"The Chamber is dedicated to driving economic prosperity, enhancing our region's quality of life and supporting local businesses through public advocacy and partnership support," said Carlan. "I am honored to serve as the Chair for an organization that continues to have positive impacts on our community and enhances our region."

Several awards were presented during the meeting to individuals and organizations for their outstanding commitment and dedication to the chamber.

— Local television station BlabTV was named Small Business of the Year. The station, locally owned since its inception in 1984, was recognized for its continued community involvement as well as its new direction in tackling a changing media environment.

Earlier this year, local entrepreneurs Quint and Rishy Studer entered into a management agreement with owners Fred and Brenda Vigodsky, effectively leasing the station from the family.  This acquisition followed on the heels of groundbreaking programming the station had begun with the new, hip talk show “Blab and Gab,” as well as several well-produced long form videos for the Naval Flight Academy and the Naval Aviation Museum.

— Eddie Murray was recognized as Ambassador of the Year.  Murray, who is an account executive for the Pensacola News Journal, has been chairman of the Chamber Ambassadors program, which serves as the volunteer outreach group for the Chamber.  Ambassadors, known for their bright red blazers, assist with ribbon-cuttings, give speeches to community and governmental groups, and represent the Chamber at public events.

— Randy and Terri Ramos as Committee Chairs of the Year.  The couple was instrumental in starting and supporting the Young Entrepreneur’s Academy, which provides a real-world, hands-on environment for young people to start their own business or social movement.  The program is open to students in grades 7-12.  More information about the national program is available at www.yeausa.org.

— Huston was recognized as Member of the Year.  Chamber president Jerry Maygarden noted Huston’s leadership during the organization’s past year, which included legal and political challenges as well as a complete restructuring.  Huston is an attorney with the law firm of Clark, Partington, Clary, Larry, Bond and Stackhouse.

"As one of Northwest Florida's oldest and largest business associations, the Chamber continues to stand united as an organization of passionate and innovative leaders driven to provide professional, personable and positive assistance to companies in our region," said Greater Pensacola Chamber President Jerry Maygarden. "This annual event enables us to reflect on our year-long accomplishments that have contributed to making our organization a valuable voice for the business community."