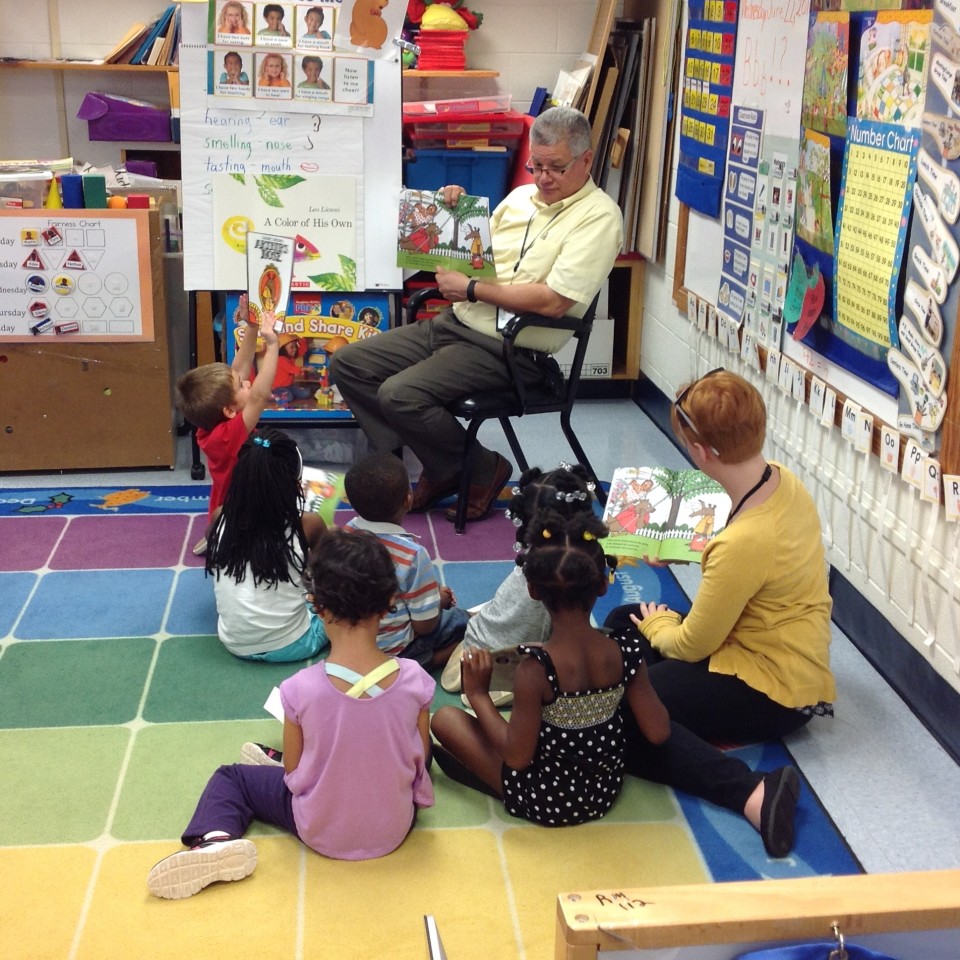 You’d be surprised the places preschool pops up these days.

CBS This Morning had a feature story this week about the aircraft carrier USS Abraham Lincoln, which saw a four-year, $4 billion refurbishment by Huntington Ingalls Industries.

The Newport News, Va., shipbuilding company’s craftspeople have rebuilt the ship, which patrolled the Persian Gulf throughout the first and second Gulf Wars. It was onboard the Lincoln in 2003 that President George W. Bush’s announced the end of major combat operations in Iraq. It also provided aid and relief after the Indian Ocean 2004 tsunami.

The story by CBS reporter Jan Crawford highlights the awesome amount of work and immense pride the people who work on the ship take in building it, from the electricians all the way up to Mike Petters, Huntington Ingalls president and CEO.

You can watch it here.

But it was something mentioned at the end of the report caught my ear.

“With the next generation of carriers already being built Huntington Ingalls Industries expects to be busy for decades to come,” Crawford says. “To make sure that they have enough shipbuilders to do the work, CEO Mike Petters actually donates his salary to pay for preschool scholarships for the children of his employees, hoping they’ll follow their parents into the shipyard.”

Last year it was reported that Petters would forgo his base salary — some $950,000 — to fund an education assistance fund for employees’ families. That story noted the fund would focus on early childhood education opportunities and college scholarships. It also notes that Petters has cited an investment in early education as an important investment in a community’s economic future.

A shipbuilder thinking about preschool? That’s workforce development by another name for sure.

It is a sign that the importance of a strong early childhood education experience is gaining wider and wider acceptance. Educators have long been on the front lines of this; advocates in the early education space, too.

Business leaders, in general, have been slower to come to the Church of Early Learning, but more and more of them are joining the congregation. Research like that from Studer Community Institute’s partners at the University of Chicago increasingly shows the payoff of investing in a young child’s early brain development.

It’s an investment that saves public money in the long term — something that should appeal to folks of all political stripes.

Estimates of that return on investment have ranged from $7 to $13 saved in social spending for every dollar invested in a person’s early childhood education experience. Much of that is based on the benefit seen in adults now who were part of the Abecedarian Project as children back in the early 1970s. Read more here.

The Abecedarian Project at the Frank Porter Graham Child Development Institute at the University of North Carolina at Chapel Hill has been gathering data on the impact preschool can have on a person’s life for more than four decades.

Children born between 1972 and 1977 were randomly assigned as infants from Orange County, N.C., to either the early educational intervention group or the control group. Researchers monitored children's progress over time with follow-up studies conducted at ages 12, 15, 21, 30, and 35.

Abecedarian children scored higher in elementary and middle school in reading and math, and fewer were placed in special education classes. They held on to the learning gains they made at age 21, were more likely to be in college and less likely to report symptoms of depression.

The findings reported in the journal Science 2014 on the group at age 35 found Abecedarian children were less likely to have pre-hypertension as adults, and lower risk of heart disease.

In April,The Brookings Institute announced the consensus findings of experts in the field on the state of PreK research.

They found Abecedarian and projects like it — where children are in full-day, year-round school-like settings with strong professional development for teachers and that work to integrate their family into the learning process — yield the greatest return.

Kenneth A. Dodge, William McDougall Professor of Public Policy Studies at Duke University was among the Brookings panel of experts.

Dodge said that, in general in terms of statewide or communitywide (like Boston) PreK programs, the more funding put into a program, the more benefit it pays out.

Returns in those kinds of programs run between 2-to-1 and 4-to-1, less than the 13-to-1 return Abecedarian shows, but still notable.

Florida’s constitution says that every 4-year-old is entitled to a year of voluntary prekindergarten. Florida’s lawmakers have never funded VPK to cover a full-school-day’s worth of instruction.

About $2,400 per child is what Florida VPK is funded for — three hours a day.

Data from the Florida Office of Early Learning, which tracks the VPK program, shows that only 63 percent of Escambia County children eligible for VPK are enrolled. The state average is 78 percent.

Getting our youngest students in the door — when we can have some of the greatest impacts on their learning and development — is a priority worth getting behind.

In this or any community.