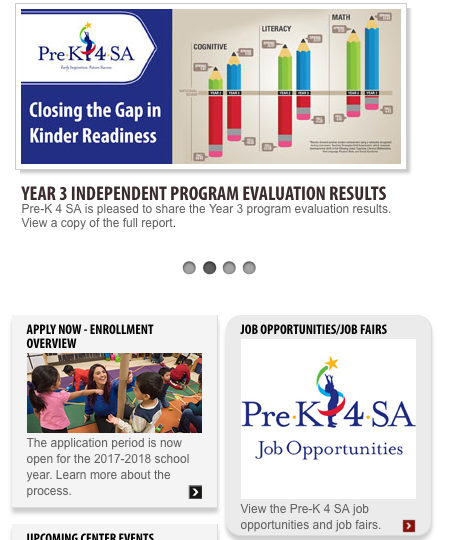 Julian Castro was 34 when he began serving as mayor of San Antonio. He was 39 when he became the U.S. Secretary of Housing and Urban Development.

With a twin who is a Congressman and a mother who was a political organizer in Texas, politics may seem like the family business.

But when he talked recently on “The Axe Files” podcast from the University of Chicago Institute of Politics, he said the thing he is most proud of from his time as mayor, he went right to early education.

In 2011, Castro’s city approved a ballot initiative to increase sales tax by one-eighth of a cent to fund high quality prekindergarten for children. The first group of “PreK for SA” kids started preschool in 2013.

“The voters passed it with 53 percent,” Castro says in the interview. “Some folks were worried this was Texas and it wouldn’t pass, but I felt it was important because I believe that brain power is the new currency of success in the 21st Century and San Antonio has lagged behind, tremendously behind, over the years.”

This year, that first cohort will take the third grade state tests. Third grade reading is an important benchmark in the educational life of a child. That’s the time when the focus shifts from learning to read to reading to learn.

Children who struggle to read and comprehend at third grade are more likely to struggle as they move on through school.

“I think that it’s given folks faith that we’re on a better trajectory. For the kids, they’re more prepared as they get into kindergarten, more likely to do well on those third grade tests,” Castro says. “We will measure the outcomes, but all of the research on this, research that has been done in (at the University of Chicago) as well, that shows that it does have a significant impact.”

Last April, I spoke with Kathy Bruck, the chief executive officer of PreK for SA. Back in 2011, she was an assistant superintendent in one of San Antonio’s 15 school districts.

The eighth-cent sales tax increase that funds the universal PreK program expires in 2020, Bruck said. The state provides funding for half a day of instruction.

PreK for SA works with seven of 15 school districts in an arrangement where kids are enrolled in the school district but come to us for class for 80 percent of what they draw down from the state, Bruck said.

There are four PreK for SA Centers serving about 1,700 students. Sites are open from 7:15 a.m. to 6 p.m. PreK for SA sites participate in the federal school lunch program.

For Fiscal Year 2017, the program issued grants to 11 parochial schools and six childcare center to pick up even more students. Now they serve 3,700 children.

Bruck said the pieces that were innovative to her about the effort were centered around parents and parent involvement.

— PreK for SA centers planned 175 events a year for parents, covering every topic under the sun in terms of parenting skills and coaching. Parent cafes at every center, access to social workers and licensed mental health counselors, workshops on the importance of a good bedtime routine, positive discipline, even a group for fathers.

—  Teachers are expected to do civic engagement activity with students. As Bruck says, even though they are 4.

“We tell them the program is a gift from the people of San Antonio and they need to say thank you,” she said.

For example, the day before Election Day, the children go to a polling place and vote by iPad. They sign in, they go to a voting booth, the whole nine yards.

Last year it was an art show. An artist acted as a visiting instructor and coached the children in art. Their works were put into an art show, and people bid online to buy the art. The previous school year, the proceeds were given to a community center that started a PreK program for 3-year-olds.

“That’s our way of giving back to the community,” she said.

— Each teacher is expected to conduct at least one weekend outing with their students and parents. During that outing, the teacher models for parents how to use places like the farmers market, the pumpkin patch, a walking trail or a community museum as opportunities for learning.

— They build learning that reflects the community. In the past, families were put into dance teams and they spend a semester learning traditional Mexican folk dancing, Bruck says. The semester is capped off with a recital.

At one center, teachers created a San Antonio room, decorated with things that reflect the sights and landmarks of the city.

— Professional development is a key investment, Bruck noted. There are Saturday workshops, monthly trainings open to staff from all the childcare centers in town, and two-day institutes with providers who do national professional development sessions that are open to the PreK for SA centers staffs and for teachers from the participating school districts for grade PreK through 3. It includes coaching for bilingual teachers, for new teachers, even coaching in teaching the writing process.

PreK for SA uses the CLASS model to evaluate teachers in the program. They use Teaching Strategies Gold to assess students progress.

Based on the Teaching Strategies Gold results, PreK for SA kids started the PreK year behind national norms in all of the six areas the test measures. By spring, the gap is eliminated, and PreK for SA kids scored higher than the norm in cognitive, literacy, oral language, math, and social and emotional areas.

They lag slightly in physical development, though the gap there was closed by 76 percent.

The full report on the program for year three is linked here.

Moving on, Bruck’s goal is simple: “I want to see it spread.”