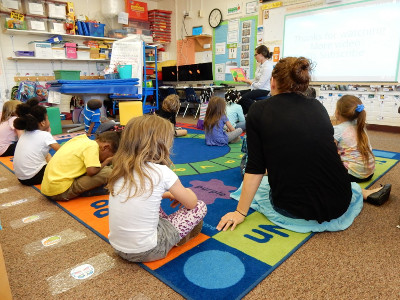 Teacher and students sitting on a rug in a classroom

What does it mean to be ready for kindergarten? Most teachers agree on the basics:

That a child can name at least seven colors; that a child knows the alphabet and the sounds that each letter makes; she can recognize and write her name; a child can share, take turns, follow directions and has the self-control to sit still for at least 10 minutes at a stretch.

But it also means that a child sees the connection between the symbol of the 4 and the concept of “four” and that four of something is more than two of something.

Children who are not ready do not demonstrate some comprehension and cannot recall info from stories read. They do not have language skills to understand what is said to them. They cannot follow two- and three-step directions. They do not have the basic understanding that writing has meaning. In math, they have little or no concept of counting and quantity, sorting/comparing shapes, or orally describe simple math concepts.

The Florida Department of Education revamped the way kindergarten readiness is tested last year. Because of those changes, Escambia County appears to have made a nearly 24-point leap in readiness in two years — from 66 percent in 2014 to nearly 90 percent for 2016, based on preliminary data released to VPK providers.

Florida lawmakers in early March 2016 directed the Office of Early Learning not to release readiness data for the second consecutive year. That leaves providers classified as low performing across the state and in Escambia County status quo for another year.

Our report looks into the challenges surrounding kindergarten readiness and making sure our children are ready for school.