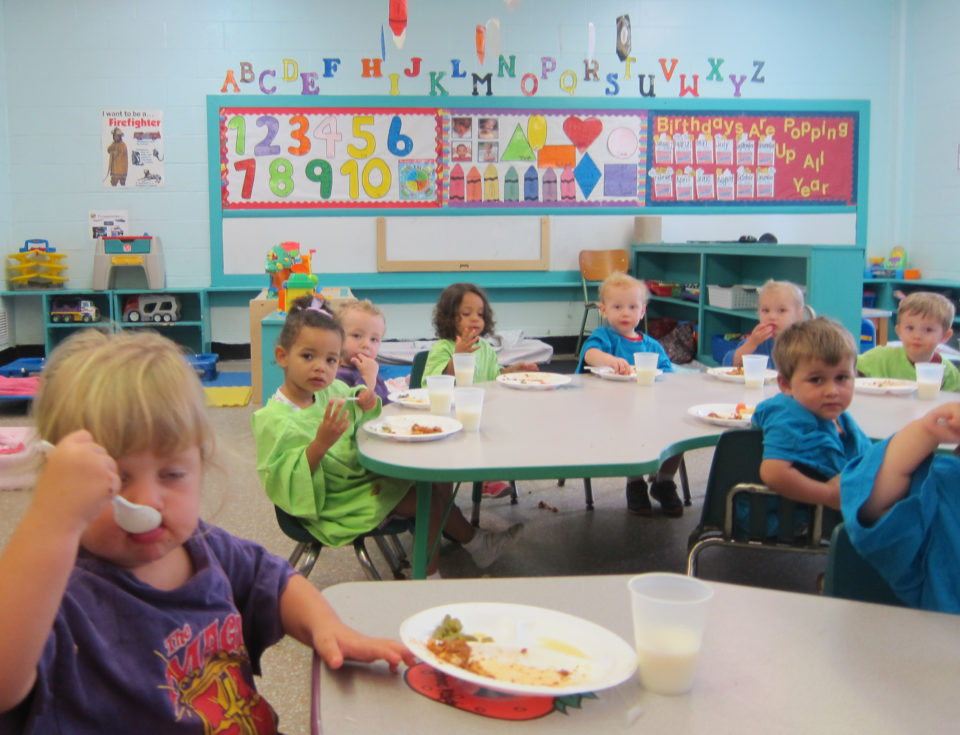 To Hailey Lynch, Child Discovery Center is a living, breathing vision of the community’s future.

The center provides care and education to 120 children from a range of economic backgrounds, from age six weeks up through preschool.

“Our center is still one of the only intentionally socioeconomically integrated childcare centers in the area, meaning, we purposefully serve families from different economic backgrounds, rich and poor,” says Lynch.

It’s a purposeful recruitment of families who qualify for financial assistance to cover the cost of childcare that is true to the vision that church members had in 1965, when First Presbyterian Church opened the childcare center as one of the first integrated centers in Northwest Florida, Lynch says.

“Hope Mager and this church had that dream back in the 60s, and look at all the life that has come from that dream,” she says.

This year, a group of church members decided to refresh the vision of CDC and become part of a partnership among the Escambia County early Learning Coalition and Studer Community Institute.

This fall, SCI and the Coalition will launch a pilot program for LENA Start in Pensacola, the first of its kind in Florida. The effort will begin with three sites — Child Discovery, Early Head Start at A.A. Dixon Center, and Kids Klub Learning Center on North Davis Highway.

“The Early Learning Coalition is looking forward to working with SCI to bring LENA to the parents of Pensacola,” says Bruce Watson, executive director of the Coalition. “Our collaboration with SCI will gather data in a way that has never been done before as we use LENA both while each child is at home and in their early learning classroom.

“We cannot underestimate the potential impact this may have on child development,” Watson says.

The goal is to add more LENA Start sites in January, where parents will meet in groups for 13 weeks to use data and hands-on instruction to boost the interactions they have with their young children.

“Research says that investing in early childhood education is the greatest investment we can make, not only to improve the lives of children and help them achieve their dreams, but also for actual economic investment,” Lynch says. “Data suggests that closing the opportunity gap would lead to cost savings in areas outside of education, such as incarceration and healthcare, and lead to a stronger workforce. When all of our children achieve at high rates, the whole community does better.

“That is exactly at the heart of our mission here with the Child Discovery Center — closing the opportunity gaps in our community, so all children have a chance at achieving their dreams,” Lynch says.

The LENA — which stands for Language Environment Analysis device — tracks the number of words a young child hears. It also tracks the conversational turns a child hears and the amount of voice noise from TV and other electronics a child hears.

The devices have been typically used in home-visitation based programs in a research setting to coach parents on how to increase the words they say to their young children. That includes some 300 projects, such as Dr. Dana Suskind’s Thirty Million Words Initiative at the University of Chicago and the Providence Talks project in Rhode Island.

The recorders offer a tangible tool — data — to help parents boost their interactions with young children, something research indicates helps children reach their developmental milestones and their greatest potential.

“We say that (more) words are great, but (conversational) turns are better,” said Traci Martin, a LENA trainer who recently conducted training sessions for SCI and Coalition staff. “Turns have six times the power of words alone to build a child’s brain.”

Those words are important because of the research that links early exposure to language with strong early brain development and ultimately school readiness.

School readiness matters because the most recently available data for the Florida Office of Early Learning indicates that only 66 percent of Escambia County children were “kindergarten ready” when they began the school year.

That’s a figure that can leave as many as one-third of our children — about 1,000 — behind their peers at the start of their school careers.

The LENA system generates a report with the data from the recorder that tracks the number of adult words, the number of conversational turns and the noise from TV and other electronics a child hears by the hour.

In LENA Start classes, parents will use those reports to see when and how much they are talking with their children, and then get lessons on how to increase those numbers, boosting the kind and quality of the interaction they have with their little ones.

Grow With Me project.

Grow With Me is a professional development program that uses LENAs and observational data to create a feedback loop for childcare providers. It covers 15 classrooms and 29 teachers in seven centers across the county.

The LENA piece is being piloted in two centers — Kim’s Mini Blessings and Come Unto Me Preschool.

Vicki Pugh, director of program improvement for the Coalition, is recruiting parents from those centers to participate in LENA Start, too.

“The thesaurus defines collaboration as: teamwork, partnership, association, alliance, relationship, cooperation, group effort, but when you click on some of those words warm and cozy words like friendship, fellowship, community are now in the definition box and could be considered old-fashion but are part of a human’s basic need,” Pugh says. “The collaborative effort between SCI/ELC is using an innovative model that crosses all socioeconomic corners of our community.  The combination of old and new is unbeatable!”

The project is one step on the path of creating an “Early Learning City” in Pensacola — a place where civic institutions, public spaces, businesses and individuals understand the critical role of parent talk and interaction in the first three years of a child’s life, and do what they can to support that.

“Right now in Escambia County in particular, the opportunity gap is so strongly tied to the achievement gap that, in essence, simply by being born in Escambia County, children are likely to earn almost $4,000 less each year than the national average,” Lynch says, citing data from Harvard researchers that tracked earning power over a lifetime and broke the data down by county.

“The opportunities you receive at birth are strong indicators for achievement in life. This is one of the more difficult places in the nation to escape generational poverty.”

In “The Power of Talk” report by LENA, it said that one objective the LENA Foundation has had from the beginning, was to confirm and extend the results of the breakthrough study released in 1995 by research professors Betty Hart and Todd Risley.

Their groundbreaking research asked why some children do better academically than others. They determined that a child’s intellectual success later in life is directly related to the amount of talk the child hears from birth to age 3.

Research conducted by the LENA Foundation confirms many of these important findings, based on nearly 3,000 recordings with children.

Key findings to date include:

— Parents estimated that they talk more with their children than they actually did.

— Most language training came from mothers, with mother accounting for 75 percent of the total talk in the child’s environment

— Parents talked more to their first-born than to their other children, particularly first-born males.

— Most adult talk in the child’s environment occurred in the late afternoon and early evening compared to other times of the day.

— The more television time in a child’s day, the lower his or her language ability scores tended to be.

— Parents are quite variable in the day-to-day amount they talk to their children, but given the opportunity to receive feedback they are able to increase the amount consistently.

Consistent with Hart and Risley’s research, the children most advanced with respect to language development had parents who spoke significantly more than parents of less advanced children.