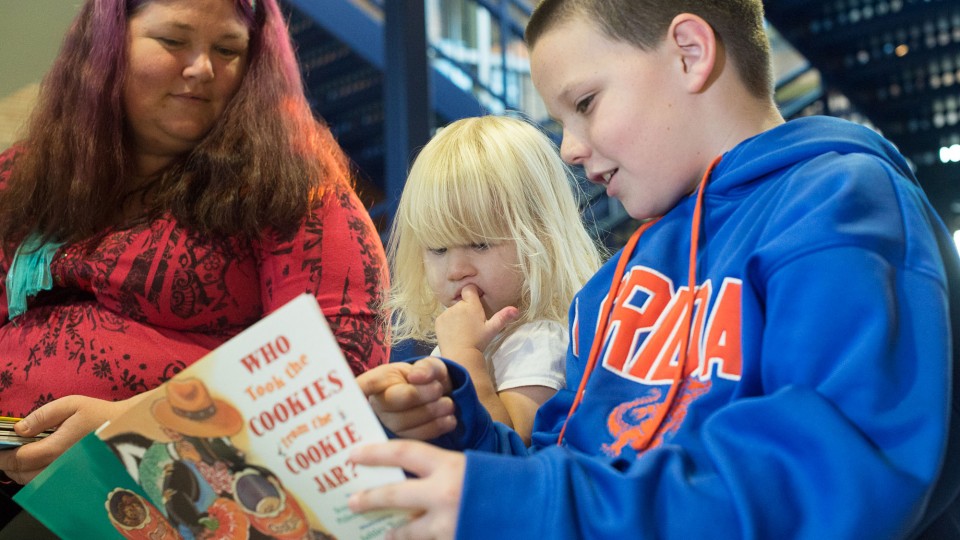 Leah Flood wants a good education for her three children and knows reading to them is important. The problem is finding the time. The 37-year-old mom takes care of her children — ages 2, 4 and 10 — while her husband works utility construction to support the family.

“Getting up one child for school at one time, getting up the other to drive him to school at a different time, and the youngest one who’s not in school, driving her around for all of that,” Flood says. “With everything else, it’s just chaotic.” When the opportunity came for Flood to enjoy dinner and reading time with her children, she jumped at the chance. The event is called Family Night, and it’s provided through the Every Child A Reader in Escambia, or ECARE. Flood attended this month’s Family Night at Global Learning Academy and brought all three children. Dinner is provided and afterward there is reading and “play” time that encourages movement and reinforces what children are learning in school. “My children love it,” said Flood. “My oldest son was sitting there reading to the little ones. He’s an avid reader. “When it was just him and me, I used to read to him all the time and he saw me reading my own books. Now I have three kids and it’s a whole lot busier.” ECARE is a nonprofit mentoring program focused on getting children ready for kindergarten. With a budget of $90,733 the program aims to ensure every child who enters school has the skills needed to be successful. ECARE’s efforts are focused on children in the downtown Pensacola area. “A very high percentage of them are arriving for pre-kindergarten with low assessments across the board on all measures, print knowledge, phonological awareness, math and vocabulary,” says Ashley Bodmer, executive director of ECARE. “We know they’re coming in and they’re not where they should be. The goal is during that pre-k year to move them up and get them ready for kindergarten.”

ECARE was born from a partnership between the Escambia County School District, civic groups and private agencies. They have now launched Project Ready, an effort to identify those early intervention strategies that can help children overcome early educational disadvantages. “The key component to that is our reading mentoring program,” Bodmer says, “and that’s where we have adult volunteers working individually with 4-year-old pre-K students.”

ECARE calls downtown the Ready Zone. ECARE volunteers started at Global Learning Academy, and now work with children at Head Start, and the daycare centers at Greater Little Rock Baptist Church and A Top Notch Christian Academy. Netisha Rodgers is director of A Top Notch Christian Academy. She has 20 children in voluntary prekindergarten and 15 in afterschool care. Most will attend Global Learning Academy when they leave her daycare. ECARE volunteers come by several days a week to work with children who need additional help and provide books. Rodgers says every book they get, they read in class. The children love learning new words, she says. “One of my kids’ favorite words during this winter season was ‘blustery’ because we read it in some books that ECARE had provided for us. “Every time it would be really windy and cold outside the kids would all say, ‘it’s so blustery out,’ and those are the kind of vocabulary words that these kids otherwise wouldn’t be exposed to.”

Make it something grand’
Rodgers says the partnership with ECARE and Global is helping her students blossom in other ways. Teachers and ECARE volunteers help track students’ progress through kindergarten and first grade, evaluating their strengths and shortfalls. Rodgers uses that information to tailor her lesson plans and help her students succeed.

“I must say in the last four or five years, the kids are being prepared more and more each year,” Rodgers says. Rodgers says the state funds daycare for most of the children in her care and about 80 percent of them have parents who are working and always on the go. Parents want to engage with their kids, she says, but most just don’t know how.

“Communication is not very big in these children’s lives. Time spent is not very big in these kids’ lives,” Rodgers says. “A lot of these kids just have TV. TV is all they know.“ That is why family night is so important. Rodgers gets the children excited about it, and in turn, they stay on their parents about going. As a result, most of their parents attend. They get a meal, quality time with their children, and tips on making teachable moments. It is a 30- to 45- minute time frame packed with learning opportunities for parents and children alike. “They don’t have to cook, everybody’s eaten, they can bring the whole family out and we just all get involved and have fun,” Rogers says. “And it also teaches these parents how, in the car on the way to school in the morning, to sing ‘Twinkle, Twinkle, Little Star,’ and make it something grand.”

Mary Anderson is the pre-K coordinator for the Escambia County School District and has worked with the pre-K program for more than 20 years. She says the more children are exposed to language and literacy at an early age, the better foundation they have to become good readers and speakers. Events like Family Night encourage that kind of interaction. “It’s such a positive event, positive for the families, as well as for the children and parents together,” says Anderson. “The parents are so thrilled with their children being able to talk about a story.”

Anderson says Family Nights are held four times a year, but ECARE could host more if there was more funding for meals. They look for donations to cover those costs so the agency can spend its resources on books for children. Bodmer would love to see the program expanded across the district to help more parents get the skills they need. “There are many parents who didn’t necessarily have encouraging role models that many of us were fortunate to have,” said Bodmer. “It’s important to be aware of that instead of assuming that parents aren’t doing something because they don’t want to do it. They just don’t know what they need to be doing, but they want to know.” Rodgers agrees. “Sometimes we get swept up in life, and I don’t think parents realize that these little young lives are just like sponges and everything we do, they’re watching,” said Rodgers.