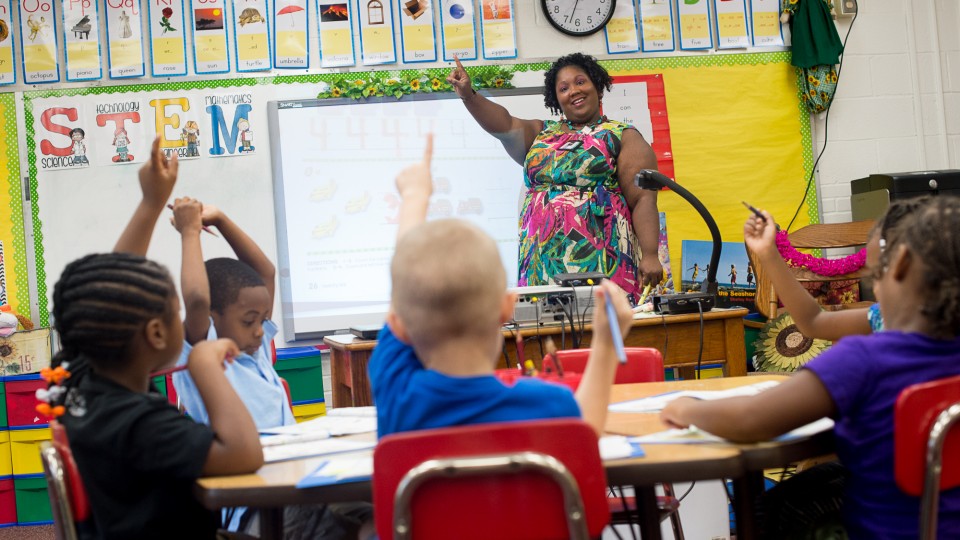 Teacher and students in a classroom

Escambia County’s story from the Studer Community Institute’s Pensacola Metro Dashboard is the link between education and the economy.

When one makes gains, the other grows. And when one stumbles, the community stagnates.

As the Institute broke down data in the dashboard for Escambia County, it revealed the small steps the community has made toward improving educational, economic and social outcomes that impact the quality of life in the community.

— Our per capita income has risen slightly, but remains more than $4,000 below the state figure.

— The influx of new employers to the community in the last 10 years, especially Navy Federal Credit Union, is a welcome shot in the economic arm. Construction of the credit union’s campus in Beulah ultimately will employ 10,000 workers and mean an investment of $1 billion.

— Building in the city of Pensacola is booming. From the expansion of the Florida Institute for Human and Machine Cognition to plans for a new downtown YMCA, from plans to renovate the historic Blount and Brent buildings by Bobby Switzer to a $50 million plan to add retail and apartment space at the former Pensacola News Journal building site by Studer Properties, construction will be a booming business in the area for the next several years.

The Dashboard data also reveal the toll that generational poverty is taking on Pensacola and its future prospects for growth.

Among the starkest findings:

— 66 percent of Escambia 5-year-olds were ready for kindergarten in the 2014 school year.

— 66 percent of our high school students are graduating on time with their peers.

— 66 percent of Escambia students are eligible for free or reduced-price lunch, a sobering figure that speaks to the harsh economic realities many of our neighbors face.

— 40 percent of households are headed by single parents, which can create economic and social hurdles for children that can impact their education and future earning power.

For Carol Carlan, banker by trade and current president of the Sacred Heart Hospital Foundation, creating a sense of urgency in the community about the link between education and the economy is crucial.

“If we had every one of our 5-year-olds ready, it would help in their performance in middle school and with the high school graduation rates, and in the number of college graduates.

“You’ve got to get the community owning this.”

Being in it together is a lesson everyone learns in La’Tris Sykes’ kindergarten classroom.

When it’s someone’s turn to go to the front of the class to demonstrate how to write the number 3, the whole class cheers: “Let’s go, Troy, let’s go!”

“Alright, I’m coming to check on my friends,” says Sykes, as she moves among her 18 students at Lincoln Park Primary School, highlighter in hand. 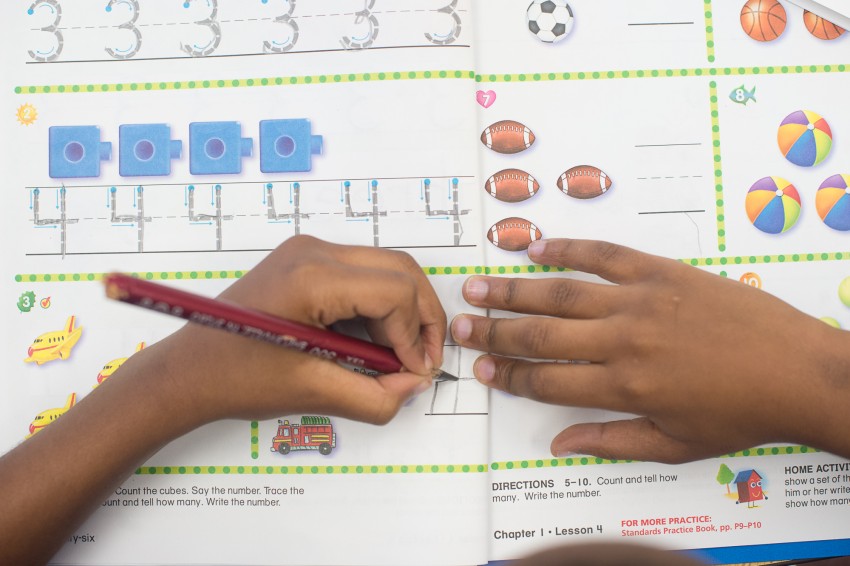 “Forming the numbers,” comes the reply from 18 voices.

Building on small gains every day is the way that Sykes leads her kindergartners through the school day. It also is the way that she helps the children in her classroom who have come to her already behind their peers in letter or number recognition.

“I say, ‘If you can learn one letter, learn one sound, we’re building,’ ” says Sykes, a nine-year teacher who is in her third year at Lincoln Park, a neighborhood school off Kershaw Street. “So they know, ‘I have to learn something today,’ no matter how big or small.”

Those small steps will add up.

That’s why Sykes walks around her classroom during lessons, using a highlighter to write the numbers for those who can’t properly write a 3 or a 4.

“That’s just me offering support to the ones who don’t have the fine-motor skills to do those things,” she says. “They see the difference, and they can feel it” when they see classmates who can do it on their own.

That’s why Sykes tells her class that they will come to school and learn a letter and a sound every day. The letters and sounds will make words, and the words will make a sentence.

When the gap between kids who haven’t had any preschool shows up in Sykes’ classroom, it can be hard on the children who are behind.

“I know we can’t compare student to student,” Sykes says. “(But) they see within themselves what another kid can do. To know that ‘I’m going to kindergarten, and everybody’s writing their name, and I can’t even write my name at all.’

“You got to constantly keep them motivated and going.”

As research supports, a strong foundation in early education is critical to a child’s academic — and economic — future.

“There’s substantial state funding that goes into early learning, but it’s not enough. It funds a half-day,” Thomas says. “For a working family, that’s not going to be sufficient. If you’ve got a job, you’ve got to work all day, not half a day. And if you have to pay the daycare center for the child to stay the whole day, that takes away from the parents’ wages.”

In Escambia County those wages lag state and national averages.

Scott Luth is the head of FloridaWest, Escambia’s economic development agency. Luth and his team are focusing their efforts on industries that bring better-than-average wages to the metro area.

— The Port of Pensacola and the niche market it offers. Right now, that is offshore oil and gas.

— Niche manufacturing industries that are growing.

“When you look at those sectors, they really meet all of the things that we’re looking for,” Luth says.

The key, Luth says, is to grow Pensacola as “a true city, not just a tourism community.”

To diversify the area’s economy, Luth says the Greater Pensacola Chamber of Commerce’s Gap Analysis, done in cooperation with UWF, was the starting point. The report focused on two industry clusters — advanced manufacturing and information technology — as key to improving the metro area’s labor prospects. It also found gaps in the way the education pipeline is matching that need.

Since then, the community has looked at ways to close that gap.

As an example, Luth points out a mobile welding unit that Pensacola State College took to Century to teach the traditional skill and the technological advances that are influencing it now in a community where about 40 percent of the population lives in poverty.

“I think when they graduated all but one had been hired,” Luth says. “Because of that success, there’s so much interest that they’re going to be building out a welding training program in Century, and they’re going to send the mobile unit someplace else.

“That’s one example of an outcome that we really recognize the need for,” Luth said.

George Stone Technical Center is starting an airframe repair and maintenance training program to support employers like VT-MAE, which is to create some 300 jobs at a facility to be built at Pensacola International Airport.

UWF and Pensacola State are realigning their internal programs to support the cybersecurity and IT industries.

The chamber last year the rolled out Greater Pensacola Career Pathways, a one-stop online portal to help parents, guidance counselors and students see where the job growth is expected to be in the market — and how to match an education track to it.

Another project in the works is Project AIMS, which has been submitted for RESTORE Act funding. Led by Pensacola State, which partnered with Escambia County School District, University of West Florida, Early Learning Coalition of Escambia County, CareerSource Escarosa, business and nonprofit agencies, AIMS will expand overall training opportunities, provide 400 participants, including 100 eligible low-income individuals from targeted areas who will receive additional supportive services, with the education and training necessary to enter and advance in high skill, wage and demand STEM jobs.

Recruiting and creating jobs that will raise the county’s per capita wage will, Luth says, “counteract the service and tourism jobs, which are jobs we want to grow as well.”

“The economic development process that we work on is a very long process where you have to invest a lot of money up front,” Luth says.

“But you want to continue to make those investments and make sure that you have a community that’s prepared.”

Luth notes that workforce development, ultimately, begins “at birth, but a lot of the issues that we’re talking about as a community truly are education issues not workforce issues.”

The business community, he says, can offer expertise and support for the cause, “but who really needs to take that ball and run with it, I think, is the community as a whole.” 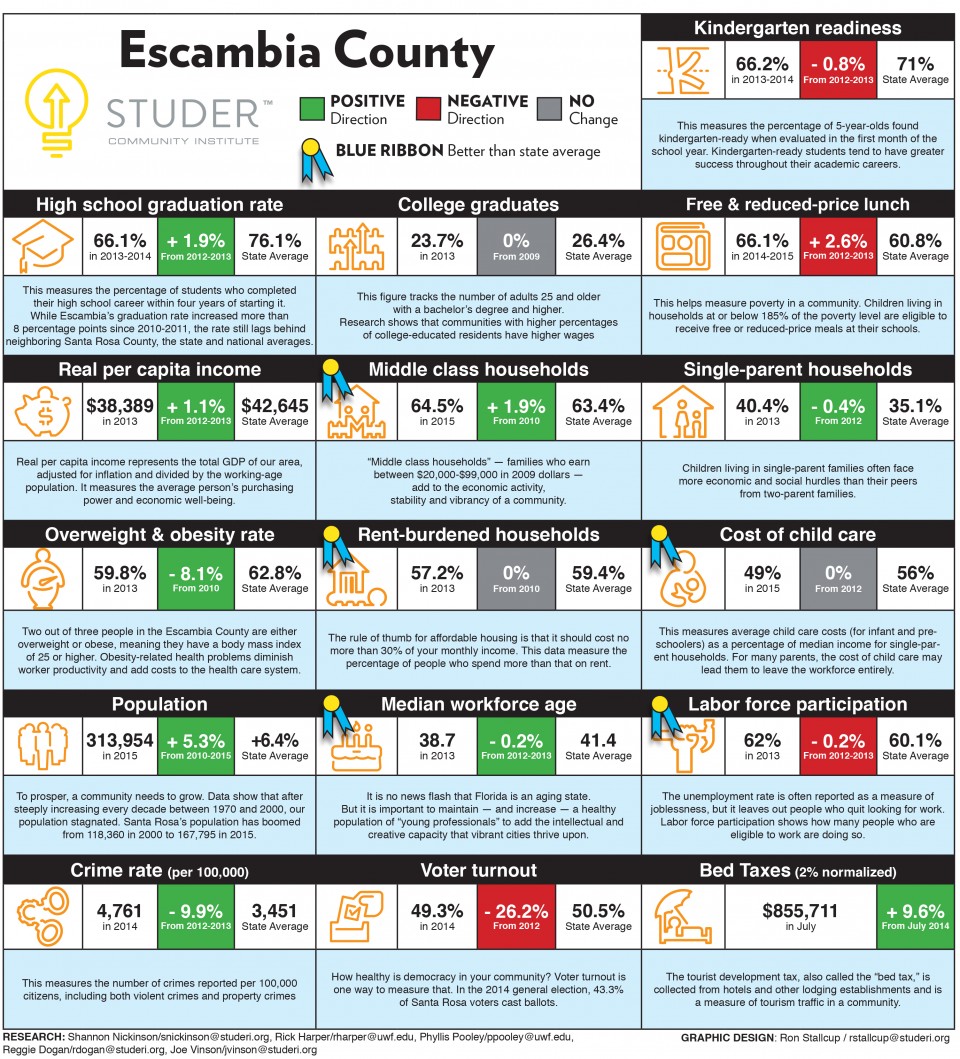