How far did Escambia kindergartners come in a year? 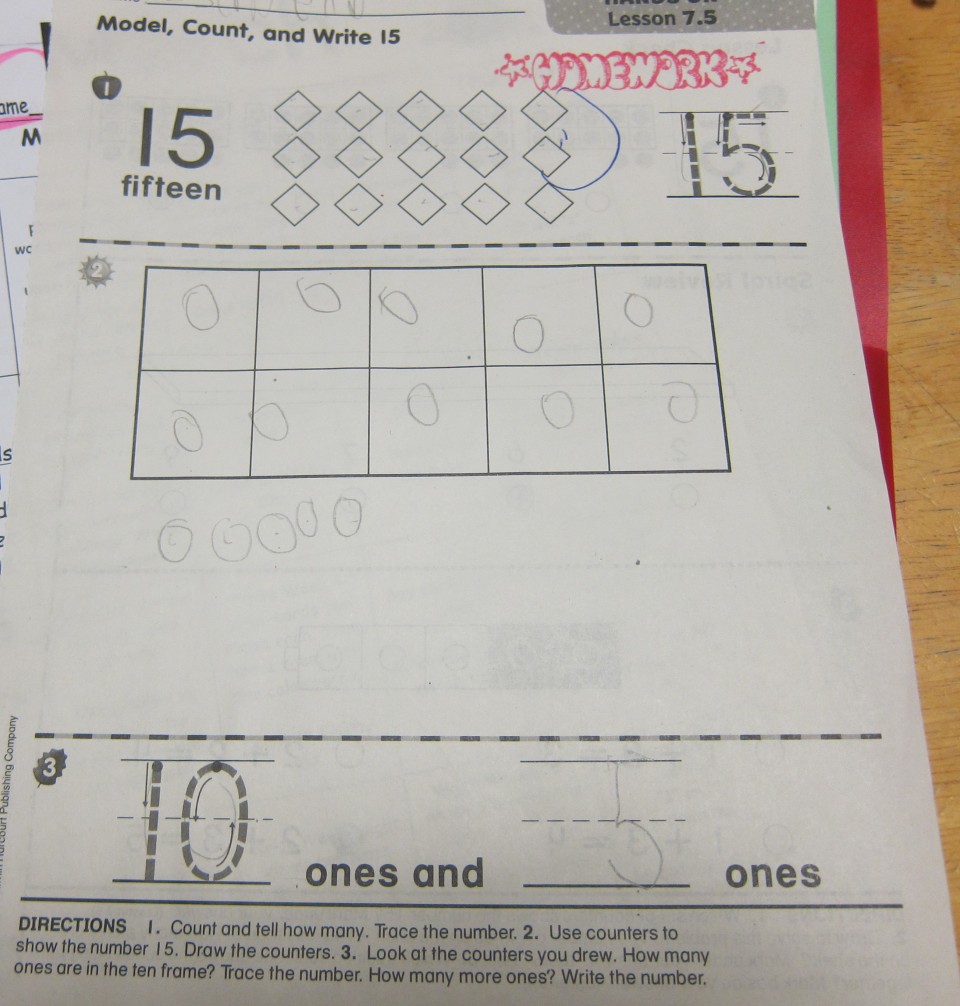 It takes a special person to teach. Especially to teach kindergarten.

Many of the kindergarten teachers I have met say they love that age group because it is the year where their students show the most growth.

By the end of the school year, kindergartners must be fluent in addition and subtraction facts for all numbers 0 to 5, know at least 72 words on sight, and demonstrate skill in answering writing prompts, even if the spelling is imperfect.

The most recently available data from the Florida Office of Early Learning, indicates that roughly one-third of Escambia County students are not ready for kindergarten.

The State has struggled to maintain and administer a version of its Florida Kindergarten Readiness Screener (FLKRS) that is comprehensive and comparable across time. This is the second year that new readiness rates were not released because only one piece of what used to be a two-piece assessment was done.

In the meantime, Escambia County has used Discovery Education testing to assess the math and language skills of every kindergartner in the first 30 days of school. It is not as comprehensive as the old FLKRS screening, but it looks at skills children will need to develop as readers.

— This year, 57 percent of kindergartners — 1,789 children — were significantly below expectations in reading.

— At 25 of our 33 elementary schools, 50 percent or more of the students were significantly below expectations.

And here enters the Kindergarten Miracle.

By the end of the school year:

— Only 414 children were significantly behind in reading.

— Only 100 of the 567 children who were significantly behind in math remained in that category. 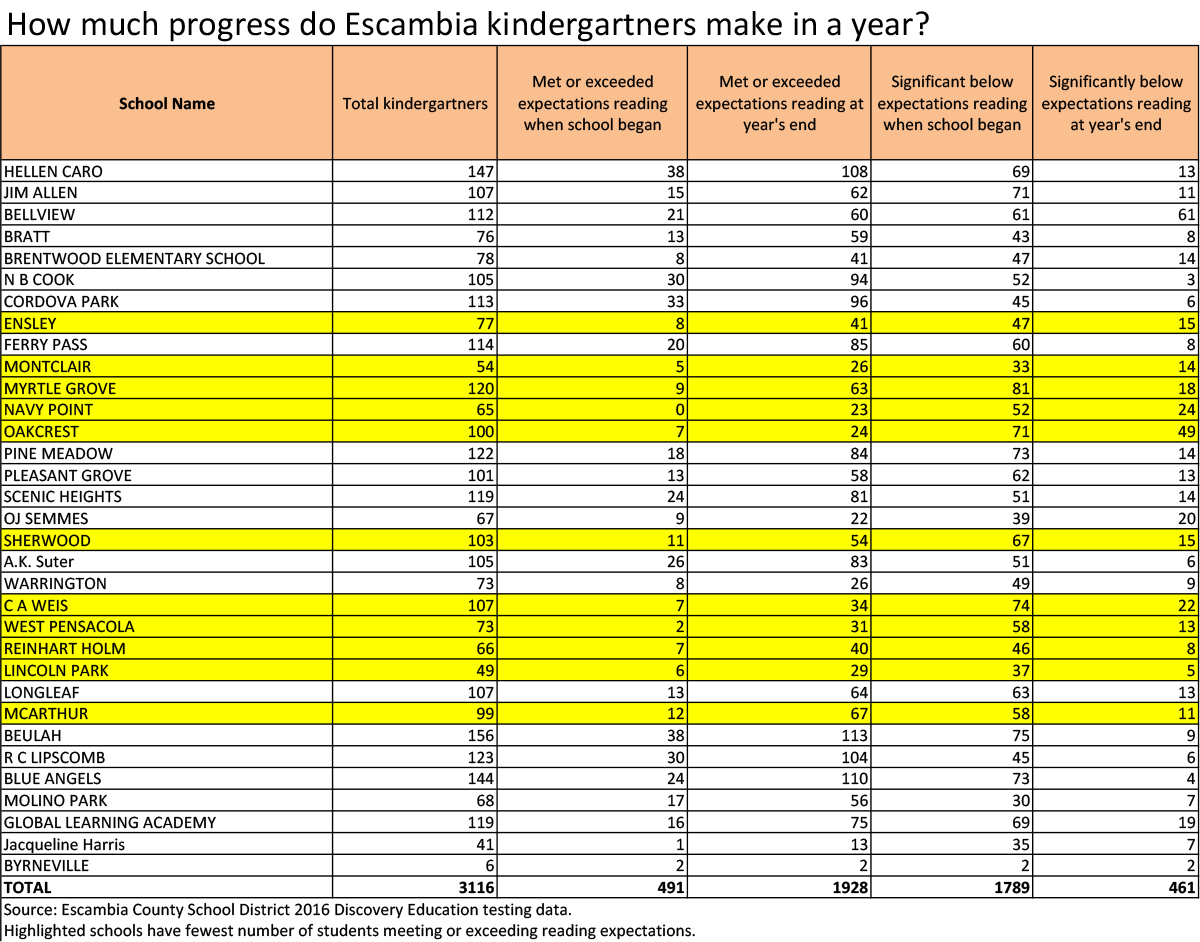 And then let the congregation’s ears perk up.

Because there are still clouds among those rays of light.

— At six elementary schools, — Navy Point, Oakcrest, West Pensacola, Holm, Lincoln Park, and Jacqueline Harris — at least 70 percent of kindergarteners were at the lowest reading level at the beginning of school.

— At the beginning of the year, nine schools had no student score “exceeds expectations” in reading. These schools — Montclair, Myrtle Grove, Navy Point, Oakcrest, Sherwood, Weis, Lincoln Park, West Pensacola, McArthur — had no more than a dozen children meet expectations in reading.

In all of those schools, only 66 children met or exceeded the range of skills they’ll need to be good readers.

By the end of the year at those some same schools, 391 children were ready.

Our teachers do a yeoman’s job.

And even then, they can’t reach all the children they need to.

Research shows that kindergarten readiness is among the most important measures of a child’s academic progress. Children who are behind in kindergarten are more likely to be behind in third-grade reading, and indeed throughout their school careers.

And it shows that only 66 percent of Escambia’s children are ready for kindergarten.

Which makes it imperative that we invest in those children before they get to school.

— That means making quality preschool and early learning experiences the norm in our community.

That’s something the Early Learning Coalition of Escambia County is aiming to do with its new quality ratings system, Stars Over Escambia. The voluntary system rates early childhood care providers in areas including family interaction, student assessment, teacher qualifications and others.

— It means making sure that all of our 4-year-olds get access to the voluntary prekindergarten experience state law affords them. Changes last year to the application process — which went to an online-only format — and transportation issues Early Learning Coalition officials say contributed to a drop in enrollment in VPK for the 2015-2016 school year of about 500 children compared to previous years.

It may only be funded for three hours a day, but it is better than no formal preschool at all.

— And that we invest in their parents.

Other communities do it. A nonprofit in Martin and St. Lucie counties has for nearly two decades conducted a home-visit program for all new parents that focuses on the importance of early brain development and the critical role that parent talk plays in it.

In Chicago, the Thirty Million Words Initiative has for more than seven years built on research that shows the number and kind of words children hear before age 3 has a profound impact on their brain development.

In the Dallas neighborhood of Bachman Lake, a group of funders created a neighborhood-based, one-stop community center to get moms the support and skills they need, while providing their children under 4 with an education-rich childcare environment.

There are other examples to be sure.

We are not wanting for inspiration.

What we need is what those kindergarten teachers work all 180 days of the year to instill in their students.

The desire to try to do better today than we did the day before.