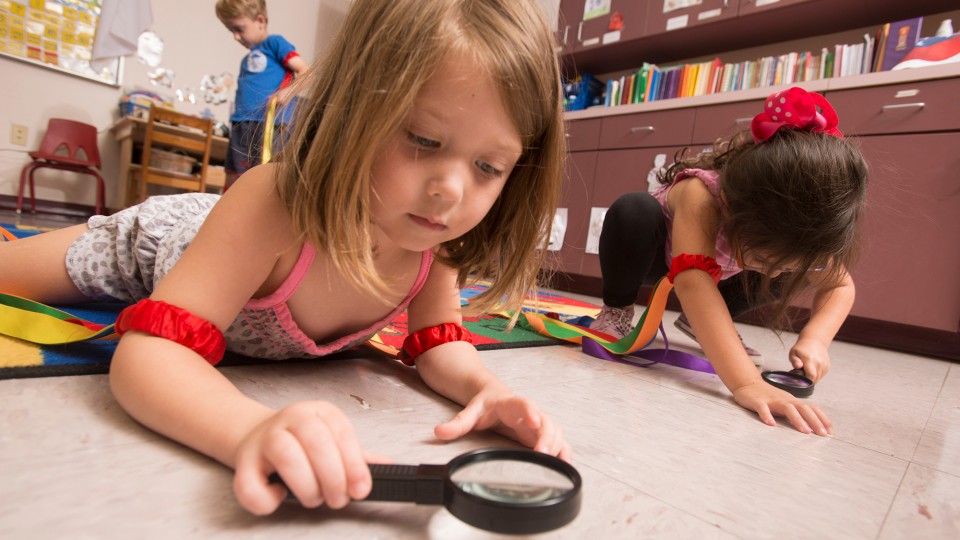 Claire Hedgepeth uses a magnifying glass to investigate along with others in a pre-K class at Myrtle Grove Baptist Church Pre-School Learning Center
In Pensacola, our economic prospects are all about education. When asked what our area needs more than anything to develop more high-quality jobs and a vibrant economy, many Pensacola leaders stress improved education, particularly early education, for students in the lowest-achieving sections of the county. “We're not going to have the high-income jobs we want here until more children show up to first grade ready to learn,” Rick Harper, director of the Office of Economic Development and Engagement at the University of West Florida, said at a recent economic symposium. But few local leaders seem to know how to achieve that goal, other than a vague notion of having parents in low-income areas more involved in their kids' development. “I think there are some best practices out there, but I don't think we have found the key yet,” said Jerry Maygarden, president of the Greater Pensacola Chamber of Commerce. Without changes, this area could be slipping into a permanent two-tiered society of haves and have-nots, Harper said. While Mobile County has plenty of have-nots, here's what that community and others have done to improve school readiness, graduation rates and skills training.

By the late 1990s, Mobile County's public school system was in perilous condition. With many white families moving to private schools and to Baldwin County, tax support was dwindling. The schools were so short of funding that the superintendent threatened to close high school football programs. “And he would have done it, too,” said Carolyn Akers, a longtime education leader in Mobile. The threat to football galvanized the community. The Mobile Area Education Foundation, with Akers at the helm, also got involved, building a grassroots coalition and an intensive “Yes We Can!” campaign. In 2001, county voters agreed to raise sales and property taxes, generating more than $28 million in annual revenue. “That gave us a stable footing to start addressing our needs,” Akers said. Next, the school district moved to transform five failing schools, dismissed much of the faculty and administration at those schools, and gave $4,000 bonuses to high-achieving teachers to work there. Eventually, teachers said the bonuses made little difference: It was having supportive, forward-thinking leadership at the schools that helped them reach the neediest students, officials said. Mobile County schools also invested heavily in teacher development, training teachers in reaching under-performing kids, and placing more emphasis on skilled trades, as well as science, technology, engineering and math, according to school officials and news reports. County voters in 2011 voted to renew other property taxes, keeping $55 million annually going to schools.

The district worked closely with local business and industry to determine what skills were needed most, said Martha Peek, Mobile's schools superintendent since late 2011. Eight of Mobile County's 12 high schools now have signature career academies, specializing in career paths from engineering to aerospace to manufacturing to teaching to medical fields. Graduates earn career-readiness certificates. “For years we were dancing with business and industry; now it's time to hug,” Peek said. Almost all students take advanced placement exams to determine who should enroll in higher-level classes. For suspended students, the district offers afternoon classes when most other kids aren't around. Older kids who have been held back may attend twilight school in the evenings, with other students their age. The changes appear to have paid off, at least by some measures. Mobile County's four-year graduation rate for high schoolers has climbed steadily in recent years, reaching 75 percent last year — almost 10 points higher than the 64.2 percent rate in Escambia County for 2012-2013. Escambia school leaders are quick to point out that they have taken almost all the same steps that Mobile has. The most noticeable difference between the two districts appears to be in teacher pay. The average teacher salary in Mobile County is about $10,000 more per year than in Escambia, state data show. Escambia schools also offer 61 career academies in all high schools — almost five times the number just six years ago. A construction academy at Pine Forest High School, for example, has received high marks, but it always needs more lumber and other materials, said Escambia Schools Superintendent Malcolm Thomas. Thomas stressed that the differences people claim to see in Mobile and Pensacola-area schools may be an illusion. “Florida has a higher standard than almost every state on grades and graduation requirements,” he said. “If we lowered our standards, we could have higher rates, too. But we take a more rigorous approach and we look bad because of it.”

Ask an elementary school teacher if pre-kindergarten classes are needed to prepare children to learn, and most will answer with a resounding “yes!” In that respect, Escambia County may be ahead of Mobile — but maybe not for long. Almost 72 percent of the 4-year-olds in Escambia participate in voluntary pre-K programs, according to the Florida Office of Early Learning. That compares to a 50 percent rate in Mobile County. Mobile officials hope to raise that figure in coming years. “Universal pre-K — that is our goal,” Mobile’s Akers said. Some states, including Oklahoma and Georgia, have instituted mandatory pre-K for all 4-year-olds. Some of those programs have produced significant gains in school readiness, studies suggest. Like most school initiatives, results depend on the quality of the program, how well trained the teacher is, and what the teacher-to-student ratio is. Thomas said he would not implement mandatory pre-K for everyone, but would assess all 4-year-olds in the county. Children needing help would have to attend all-day programs, he said. The all-day programs would also serve as day care, allowing parents to work. “Right now, 15 to 20 percent of our kids are not ready for kindergarten,” Thomas said. “And that's the ultimate prize, increasing the number of kids who are ready to learn when they enter school.”

Other community leaders say all of the emphasis shouldn’t be on early education. Companies considering locating here are asking Jennifer Landrum Grove, Gulf Power Co.'s workforce development coordinator, “why so many kids are going to college, and to the wrong kind of college.” Thomas acknowledges that there must be a bigger push locally and across Florida to get more students into skilled trades. “Not every kid needs to go to college,” he said. “There's a desperate need out there for brickmasons, plumbers, welders.” The Florida Legislature's course requirements may have hamstrung schools to some degree, requiring vo-tech students to take algebra II and chemistry, he said. Before ST Aerospace agreed to touch down in Pensacola, this area had no FAA-certified aircraft mechanic training schools. Now, both Pensacola State College and George Stone Technical Institute are building programs to fill the needs of ST and future aircraft service companies. But more may be needed to keep up with a growing demand, company leaders said. Alabama has leaned heavily on the skilled-labor-training angle, spending as much as $40 million a year to train companies' workers through the Alabama Industrial Development Training agency, compared to just $12 million from a similar program in Florida. The AIDT branch in Mobile now has a highly visible center right next to the interstate and is a clearinghouse for skilled-labor jobs. The state also advertises frequently on television, with commercials featuring “Dirty Jobs” TV start Mike Rowe urging young people to go into trades that require only two-year degrees or less. To steer more youth into fields that require only an associate's degree or training certification, Grove advocates more scholarships and grants for those students and asking corporate leaders to advertise the need for those types of workers. “Everyone wants their child to go to college and have a sexy job, but let's not forget that the backbone of an industrial economy is skilled trades,” she said.