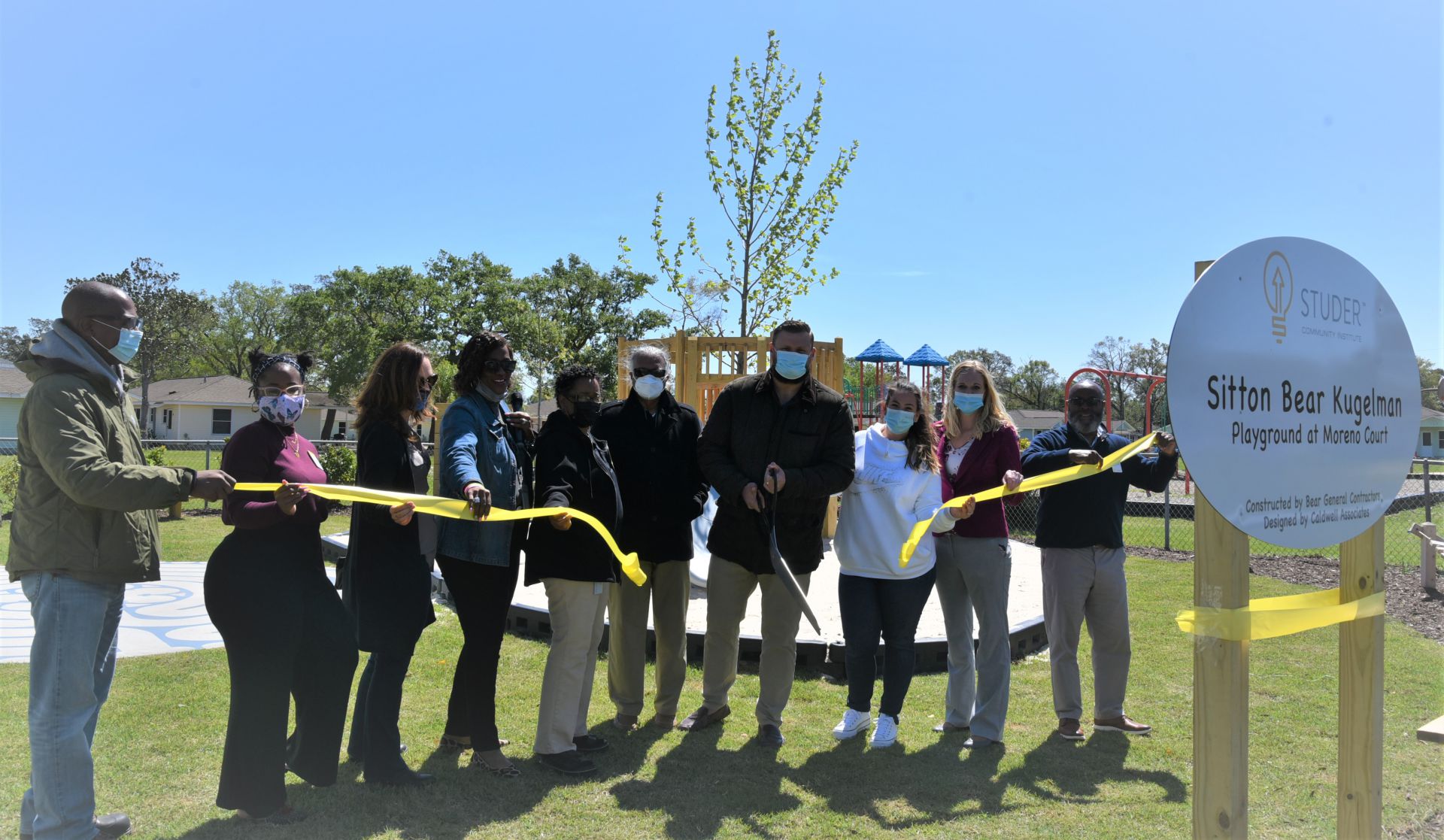 playground ribbon cutting
Just months after the first early-learning natural playground was opened at Moreno Court, another playspace is in the works.
In April 2021, the Sitton Bear Kugelman playground at Moreno Court was dedicated at the housing complex off Old Corry Field Road. Later this year, the Sansing Family playspace will come to another high-need community: Gonzalez Court off of North NInth Avenue.
Both campuses are managed by Area Housing Commission, SCI’s partner in bringing coaching, support and resources to families with children under the age of 5.
The Make Play Smart playgrounds create a play space that is fun and also support the healthy development of a child’s brain. That is an aspect of the SCI’s efforts to support healthy early brain development and school readiness in Pensacola.
At Moreno Court, three Pensacola area families made a $30,000 investment in the garden. Area Housing staff will maintain the space, and will recruit parent residents who need volunteer hours to help with upkeep.
The Sitton, Bear and Kugelman families collaborated to make sure that the playground could be become a reality, donating $30,000 toward the cost. Sandy Sansing and his family stepped up to donate $25,000 toward another playground.
“Kristen and I get so much joy out of helping people in the community, especially children,” said Josh Sitton. “We are excited to have been a part of this amazing project for children to enjoy for years to come!”
The Bear Family Foundation chose to support this project to enable children in our community the chance to enjoy the outdoors, in a healthy and playful setting, said Cindi Bonner, member of the family foundation’s board.
“The Sitton Bear Kugelman playground provides an opportunity for children to communicate, in person, with one another and to also spend time together, with other family members,” Bonner said. “Furnishing the space allows a child to explore their imagination and for memories to be made.”
Jane Lauter, president of the Kugelman Family Foundation, said her family is thrilled to be part of the project.
“The Kugelman Family Foundation is elated to support this project with other local foundations,” Lauter said. “We believe in our Pensacola community and working hard to make it better each and every day. Together we can do great things and allow opportunities for children to continue to grow and advance in positive ways.”
Research shows that being in nature boosts a child’s brain development and ability to focus, be creative and solve problems. This project takes elements of play and nature and combines them into a learning space that is beautiful and fun.
Area Housing Commission management donated the space for the project. Managers on site will work with residents who will help to maintain the space as part of the community volunteer hours they are required to give annually.
Associate director Shirley Henderson said in the 80 years that Area Housing has served the community, SCI is the first community partner to work so closely with the agency to improve the lives of the families they serve.
“Children learn about their world through their senses,” Henderson said. “Creating a safe, diverse and developmentally appropriate outdoor learning environment can allow them to explore and learn so much more about their senses and nature.”
“SCI’s mission in our early learning work is to build a brain, build a life and build a community,” said Shannon Nickinson, director of early learning for the nonprofit institute. “By investing in the families of Moreno Court, the Sittons, the Bears and the Kugelmans have shown that they value the potential of every child. We hope their investment in this neighborhood will serve as an example to the rest of the community about the commitment to building a culture of early learning from the ground up.”
The goal of the project is to provide the children of Moreno Court with an educational play space that highlights nature and the environment as part of the design. This will inspire their play to be purposeful, it will give them a connection to the natural world they do not currently have, and it will inspire the community at large to replicate such an investment in other under-served areas.
Bear General Contractors managed the construction and installation of the play space, which was based on a similar space at the Bodacious Brew. Both have been designed by Caldwell and Associates.
Since 2014, Studer Community Institute has created public awareness, programs and projects to boost the kindergarten readiness of our community’s children. State education data shows that only 48 percent of children are ready for kindergarten in Escambia County. SCI’s in-hospital and in-person education programs have worked to increase parent knowledge of the role language and interaction plays in healthy early brain development, a critical component of a child’s ultimate school readiness. To learn more about that work, visit www.studeri.org.