How readiness weighs on VPK providers 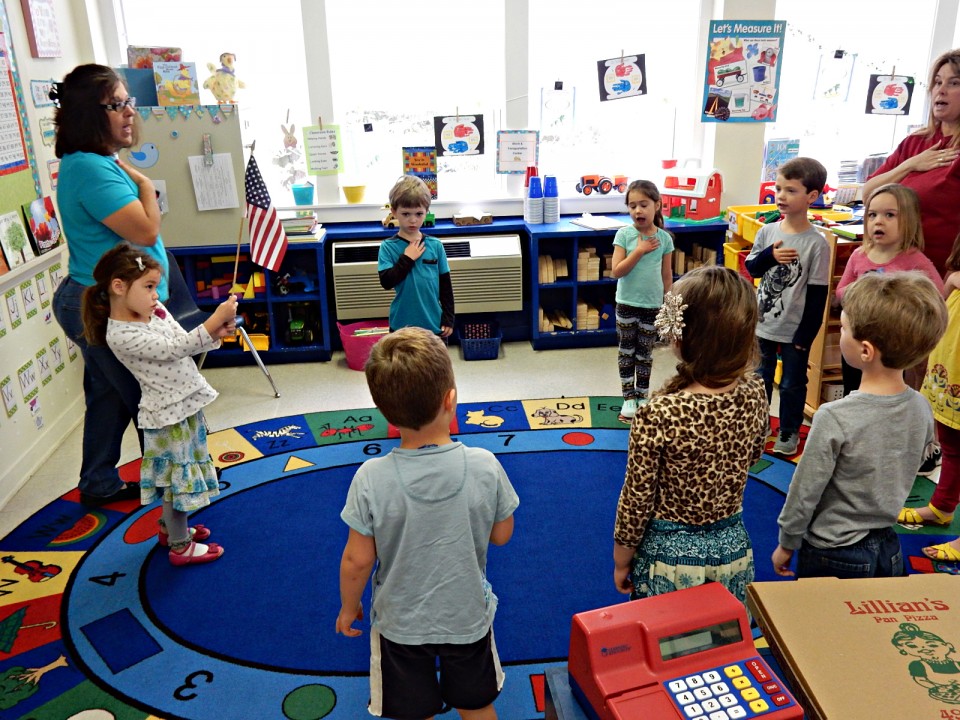 Perschoolers in Belinda Churchill’s VPK class at St. Christopher’s Children’s Center start the day with the Pledge of Allegiance and patriotic songs.

Belinda Churchill gets a lot of mileage out of a pizza.

Math skills come from making a table and ranking everyone’s favorite topping. Self-control and listening skills come with an exercise in making individual English muffin pizzas for a snack.

The artistic piece comes in the homework assignment to decorate your own pizza slice however you like. Fine motor skills and shape identification are also part of the lesson for the children in Churchill’s voluntary prekindergarten class at St. Christopher’s Children’s center at the namesake Episcopal Church in Pensacola. She and co-teacher Lisa Corman work to document those skills and more with notes, observation, photos and video.

That effort is put into a program called Teaching Strategies Gold, a tool required this year by the Florida Department of Education’s Office of Early Learning to help track academic and social progress of 4-year-olds in the state’s VPK system.

“I’m real proud of my staff,” says Allison Sanchez, director of St. Christopher’s Children center. “It’s helped bring more attention to the standards, which have always been there, and made everyone really look at them and make sure we’re meeting them.” 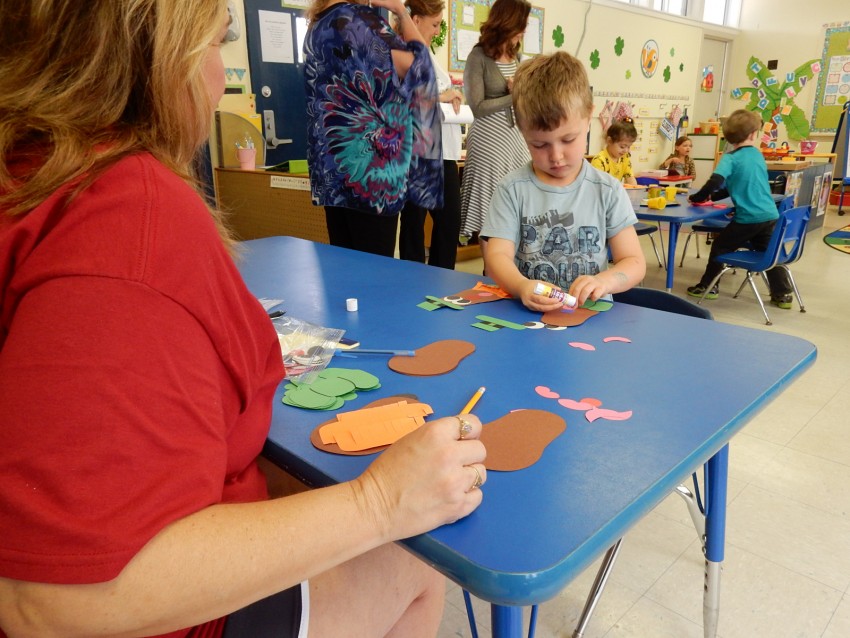 What remains is a test given at the beginning and near the end of the VPK year that focuses more on early math and language arts skills, without the social and developmental parts that TSG included.

That test touches four areas: print knowledge, phonological awareness, mathematics and oral language/vocabulary. Providers have used that data to spot areas where a child may be weak and address them before the end of the VPK school year. 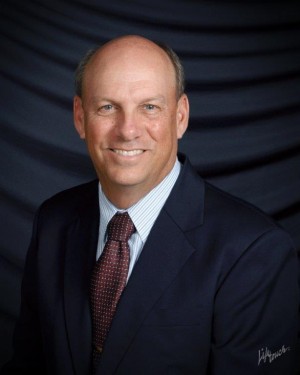 “Besides being a very good comprehensive evaluation of each child, the processes it requires to do the observations are also designed to increase the awareness of the teachers of their influence and the role they play in the child's education and development, which in turns helps make them better teachers,” Watson says.

Watson says taking out Teaching Strategies came with a give and take that removed a proposed increase in VPK funding, as well as the funding for the assessments.

The money, he says, instead went to the K-12 program.

“The fact that the money went to K-12 also speaks to the disregard many have for the importance of early learning and VPK in particular,” Watson says.

Change has come early and often to preschool providers in Florida. Funding to implement those changes has not always followed, some say.

“Since VPK has begun, every couple of years there’s been a change in how assessments were done,” says Tara Huls, who leads VPK program and policy in the Florida Department of Education’s Office of Early Learning. “This isn’t the first time we’ve had such a change.”

All of that change has created a vacuum of information on VPK providers, who rely on the results of kindergarten readiness tests for their own readiness rates.

Those rates essentially haven’t been updated since 2013, thanks to problems with the way the Florida Kindergarten Readiness Screener (FLKRS) has been administered.

From 2010 to 2014, the screening test had two parts: Florida Assessments for Instruction in Reading (FAIR) and Work Sampling System given in the first 30 days of the school year by kindergarten teachers.

Work Sampling is portfolio-based and includes an observation by the teacher, samples of a child’s work, and physical, social and emotional developmental markers.

In 2014, school districts across the state reported problems with FAIR, which went to an electronic format. FAIR was dropped and won’t return.

Alix Miller, a Department of Education spokeswoman, said the contract for the Work Sampling test is through 2016-17 with two optional years: 2017-18 and 2018-19. FAIR at the kindergarten level will not be resurrected.

Presumably that leaves open the possibility of the same criticisms that dogged the Work Sampling only readiness results to arise again next year.

Providers used Teaching Strategies Gold are to evaluate each of their children three times a year on 38 points in a child’s development, including math and language arts milestones (counting with blocks, recognizing numbers and letters, sight word development), social and emotional development milestones.

It requires preschool teachers to enter daily observations and documentation of each child’s progress on those milestones.

Some providers reported problems with the system, including Dawn Alt, former principal of Oriole Beach Elementary School. She now is in charge of T.R. Jackson PreK Center in Milton. 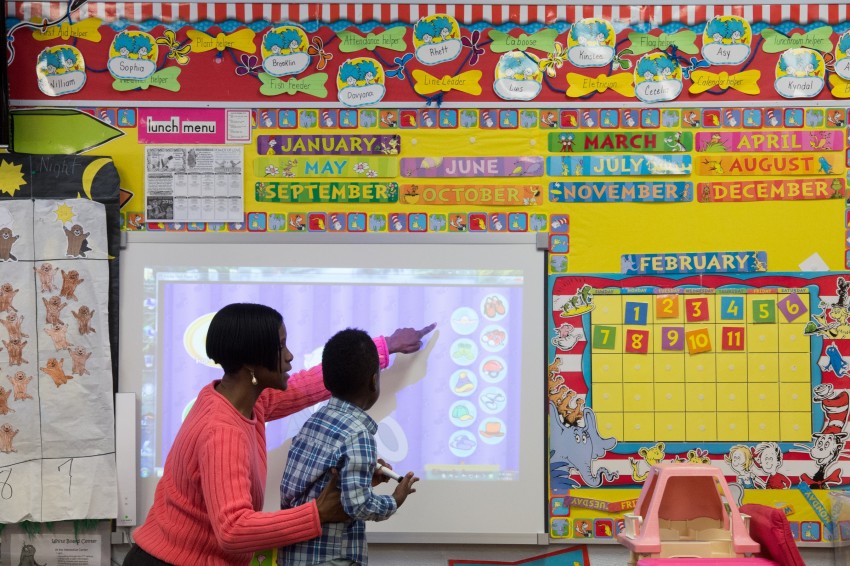 “It has been a disaster. I know you won't believe this, but it is not as disastrous for us as it is for (other centers),” Alt says. “We have gotten substitutes for our VPK teachers so that they can enter in all that data.”

Alt’s frustration included the inability to see the reports the system is supposed to generate that show what her teachers have input into the system.

Sharrell Ethridge, education and assessment specialist at T.R. Jackson, generated those reports on her own, outside of the TSG system. Teachers use the reports to see where their children need more help.

“It’s double the work,” Alt says. “We could not pull what they had put in, so they had to do it again.

“This is not just something that we don't use,” Alt says. “We want to use it. We are trying to get these children ready for kindergarten.”

The cost for quality

As the state demands more from VPK providers, it hasn’t offered them any more money for the added work.

The state’s reimbursement rate for VPK for 2016-17 is $2,437 per child, a figure that is unchanged from this year. The Base Student Allocation is less today than in 2007 in real dollars, says Escambia’s Watson.

Access to quality care is an issue as well.

“A lot of state dollars have always focused on 3s and 4s, they forget about infants and 2s,” says Brenda Hardy, director of Wee Kare Academy in Pensacola. “All of our training is geared toward older children, but they’re like sponges even as infants. They need to be talked to and stimulated even then.”

The cost of childcare

According to the market rate report for childcare providers for 2015 from the Florida Office of Early Learning:

“There just isn’t enough childcare in this area,” Hardy says. “We are licensed for 130, and I’ve turned away enough children in the last two months to fill this building up again.”

According to the Pensacola Metro Dashboard, the cost of childcare can consume on average 49 percent of the median income of a single-parent household in Escambia County; in Santa Rosa, the figure is 30 percent.

According to the Florida Department of Children and Families, which licenses centers, there are 200 licensed childcare centers in Escambia County; 85 of those are authorized as providers of the state’s voluntary prekindergarten program.

Of the 200 centers, 15 are Gold Seal Quality Care programs. That’s a designation the Florida Legislature has established to acknowledge childcare facilities and family day care homes that are accredited by nationally recognized agencies in the field.

One of the agencies is the National Association for the Education of Young Children — NAEYC. Trinity Learning Center, affiliated with Trinity Presbyterian Church on Bayou Boulevard in Pensacola, is one of three centers in Escambia County that have NAEYC accreditation.

The process is time-intensive and costly, but it is something Trinity’s director Anna Kay Shirah believes is important.

The center has renewed its accreditation three times, most recently in February 2016 for a five-year term.

The accreditation process cost about $1,400 the first time, Shirah says, and was at least $1,000 the second time. NAEYC also requires center’s to file annual reports that cost $650 every year between accreditation.

The accreditation includes evaluations on the school’s staff and leadership, training, safety, curriculum, communication with parents, and relationships with the community that include health promotion, diversity and inclusion.

NAEYC evaluates program curriculum in social, emotional, physical, language and cognitive skills for young children; if the staff meets a requirement of at least 20 hours of staff development (twice the state requirement) annually; and the use of ongoing assessment tools to track a child’s development.

It can include everything from counting how many books are in each classroom per child to how well teacher lesson plans follow an established early childhood education curriculum.

“Every time we do it, it makes us step up our game,” Shirah says. “Everyone gets complacent, but the accreditation process helps teachers and all of us realize what they should be doing to keep our standards high and our goals in site.”

The work pays off in other ways, too. For example, Shirah says, part of the accreditation requires written policies for “just about everything, which is good.

“Now the Early Learning Coalition is asking centers for their written policies on discipline.” Shirah says. That’s something, through NAEYC, we’ve had in place for years.”

Kindergarten Readiness is more than has been expected of preschool teachers in the past.

That’s because kindergarten is not what it was a generation ago, at least according to the standards that state education officials are setting for 5-year-olds.

That’s why, according to kindergarten teachers like Lincoln Park Primary School’s LaTris Sykes, VPK is a critical piece of a child’s education. 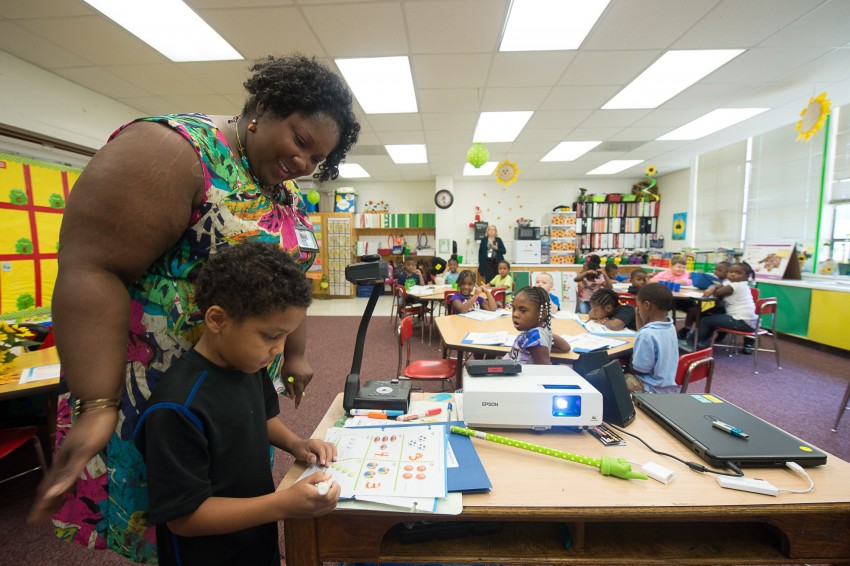 Lincoln Park is one of 14 Escambia schools that offer VPK on campus; all of those sites serve communities where at least 40 percent of the children are eligible for free- or reduced-price lunch.

“I know in pre-K, a lot of it is oral,” Sykes says. “A lot of what we do in kindergarten is like small group time, but they do have to sit down and take formal tests.”

Escambia School District uses Discovery Education, a testing program that includes skills such as using a computer, listening to a story and answering questions.

“That higher-order thinking,” Sykes says. “That's what we have to work a lot on.”