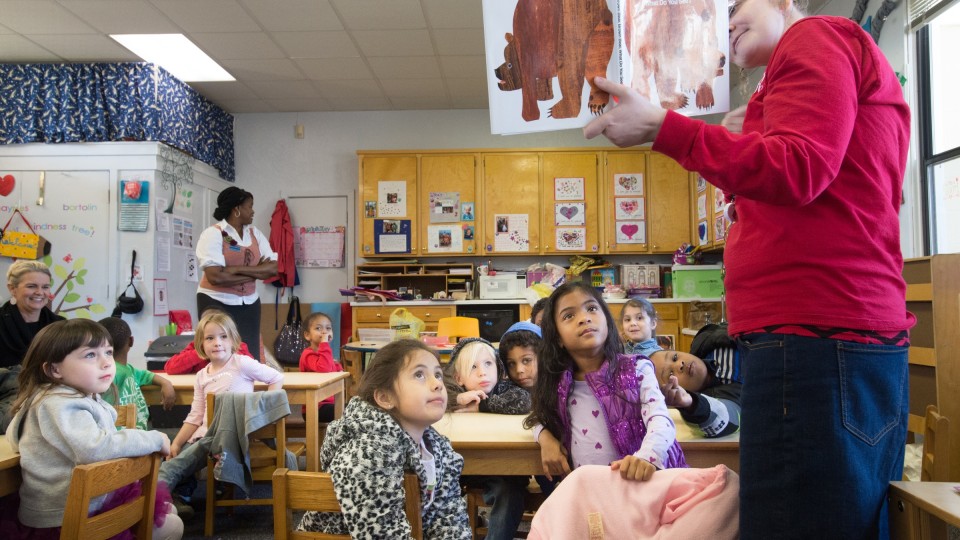 Cities and communities across the country are coming together to present ideas and offer solutions to help in the effort of improving early education by preparing young children to learn.

Research shows that children who enter school with early skills, such as basic knowledge of math and reading, are more likely than their peers to experience later academic success.

These “Bright Spots” in early education are shining examples of the types of family-centered, researched-based practices created and designed to improve educational opportunities for young children.

Generation Next focused on health screenings to boost kindergarten readiness

In Minneapolis-St. Paul, they picked “which part of the ocean they were going to boil” when it came to improving kindergarten readiness.

For them, it came down to increasing the number of 3-year-olds who were screened by a school district nurse for developmental delays that could hold them back once they get to kindergarten.

Realizing that multiple factors influence how well-prepared — or not — a child is for kindergarten, some community leaders in Minnesota’s Twin Cities used data to choose one spot where they thought they could make an impact.

It’s a strategy that the coalition called Generation Next adapted from Strive Together, a Cincinnati-based company that helps communities rally around common data-based benchmarks to improve education outcomes.

Jeremiah Ellis is the director of partnership and outreach for Generation Next, which works with United Way. He said the “Screening at 3” strategy, developed in August 2014, aims to get more children screened by nurses for social, emotional and developmental delays.

Community experts said screening by 3 was important because it leaves time for interventions to take root before a child starts kindergarten at age 5, Ellis said.

Generation Next went to members of the community partnership — companies like Target, 3M and General Mills — to help get funding for the $50,000 it would take to cover the salary of one school district nurse to go to neighborhoods where screening rates were low and reach out to families.

The plan includes using the United Way’s 211 system and all of its partner agencies to reach parents, training staff at homeless shelters, early care and education programs on the importance of the screening, and sharing information from the Hennepin County Health Department with appropriate agencies to boost screening rates.

There is more to do, but they wanted to start somewhere.

Preschool is good for more than boosting a child’s academic performance.

The Abecedarian Project at the Frank Porter Graham Child Development Institute at the University of North Carolina at Chapel Hill has been gathering data on the impact preschool can have on a person’s life for more than four decades.

Children born between 1972 and 1977 were randomly assigned as infants from Orange County, N.C., to either the early educational intervention group or the control group.

Children in the experimental group received full-time, high-quality educational intervention in a childcare setting from infancy through age 5. Each child had an individualized prescription of educational "games" incorporated into the day. These activities focused on social, emotional, and cognitive areas of development but gave particular emphasis to language.

The games have since been turned into the Creative Curriculum Learning Games curriculum, used by childcare centers and preschools nationwide.

Researchers monitored children's progress over time with follow-up studies conducted at ages 12, 15, 21, 30, and 35.

Abecedarian children scored higher in elementary and middle school in reading and math, and fewer were placed in special education classes. They held on to the learning gains they made at age 21, were more likely to be in college and less likely to report symptoms of depression.

The findings reported in the journal Science 2014 on the group at age 35 found Abecedarian children were less likely to have pre-hypertension as adults, and lower risk of heart disease. Learn more here.

If we want children prepared and ready for school from day one, they need to hear millions of words before they first step into a classroom.

“Talk With Me Baby” is a good place to take start.

The multi-faceted state of Georgia initiative was created to fill the massive 30 million-word gap between children from lower- and upper-income families by making sure that babies from all backgrounds hear many more words.

In 2014, Georgia became the first state to take a broad, widespread public health-focused approach to reducing the word gap. The state has a lofty goal of reaching all Atlanta-area newborns, regardless of family background or income, by 2017 and all newborns the state by 2020.

The groundbreaking initiative has gotten the national attention. The White House put out a “call to action” to reduce the word gap, with the focus on the Georgia program.

The program started by getting health care providers to start talking. Training nurses to introduce parents to the idea of talking to their babies is a crucial component. Training extended to pediatric nurses, nurses in hospitals’ labor and delivery departments, and even those nurses who care for pregnant women.

The program offers instructional videos for WIC clinics. These educational videos are for parents and health care providers to use together. Reminders for parents to start talking, such as magnets for the refrigerator, text messages or a smart phone app be part of the overall plan.

Several Georgia organizations stepped up to help. The United Way of Greater Atlanta pledged to support the “Talk With Me Baby” program by giving $500,000 each year for three years toward the collaborative effort.

The ultimate goal is to encourage every state to adopt the Talk With Me Baby model to reach children early and get them ready for learning long before preschool.