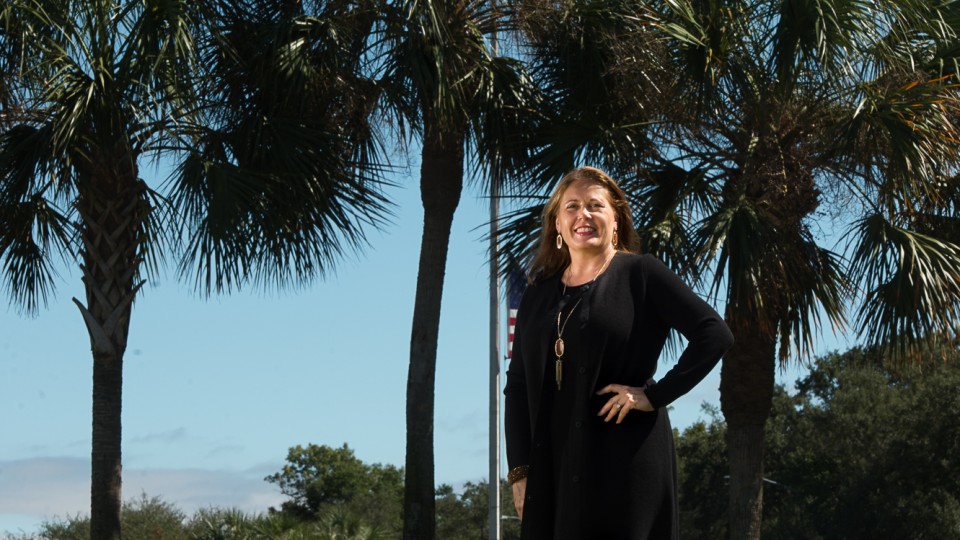 The story of Santa Rosa County over the past two decades is one of robust growth and a resolve to maintain and improve the quality of life for its citizens.

"One of the things I'm very proud of about Santa Rosa County is that I see its elected officials constantly planning ahead, and trying to anticipate that growth," said local attorney Renee Bookout, a mother of three, and member of the Gulf Breeze City Council.

"I think we're doing a pretty good job of managing growth," he said. "Evidence of that is our recent passage of a local option gas tax to go into our road maintenance program."

Salter said commissioners also are rewriting the county's land development code, which determines how future growth is managed. This document will be especially important to managing high-growth areas such as Navarre and Pace.

Based on the data from the Studer Community Institute’s Pensacola Metro Dashboard, the county’s strategy is paying off. The dashboard — 16 educational, economic and social metrics to gauge the quality of life in a community — shows Santa Rosa’s population growth, good schools, low crime rate and lower concentration of poverty make it a attractive place to live and raise a family.

— Adults with a bachelor’s degree or higher: 25.9 percent.

All of those are above the state average. They also outpace the same data for Escambia County.

Santa Rosa's proactive approach to growth management, and its sustained determination to improve the quality of life for its residents, is backed up by data compiled by the Studer Community Institute. Of the 16 metrics, which cover everything from high school graduation rates, to crime to the number of single-parent households, Santa Rosa exceeds the state average in several categories.

In fact, its high school graduation rate is among the 10 best in Florida, according to data compiled by the Florida Department of Education.

"I know in the last couple of years there has been a greater emphasis to improve that high school graduation rate,” Bookout says.

"Obviously there are barriers to that success that are well beyond what the schools themselves can do," she said. "It really takes parental involvement, but I think we have a lot of that in Santa Rosa County schools."

Santa Rosa School District Superintendent Tim Wyrosdick says growth, and the challenges it brings, is "important for our school district. Growth helps us financially, and helps us develop new services for our students.

"Controlled growth, getting out ahead of growth, is our goal," he said, noting that in the 1990s Santa Rosa was building a new school every year of that decade.

Determining where that growth is occurring, and how fast it's taking place, requires specialized data in the fields of demographics, zoning and growth management.

Wyrosdick said Boles will lead a joint meeting Nov. 4, with the Santa Rosa County Commission and School Board to begin planning the school systems' growth for the next two decades.

Two growth hot spots, where new schools are most likely to be built in the near future, are the Pace and Navarre areas.

"We have a school system where the teachers and administrators not only do a great job teaching our children academics, but teaching them good morals and values as well,” Salter says.

"If our schools fail at their job, it has a negative impact on the whole county, as well as crime," he said.

While Santa Rosa can rightfully claim one of the best school systems in the state, one growth area where it is struggling to keep up with demand is roads and transportation.

That, by far, say local officials, is the biggest — and most expensive — challenge going forward.

"We grew so much from 2000 to end of decade, it was hard to keep up, and some of our roads got overtaxed during that span," said Santa Rosa Commissioner Vice Chairman Lane Lynchard, whose District 5 includes the narrow Gulf Breeze peninsula and U.S. 98, the major east-west corridor in South Santa Rosa. 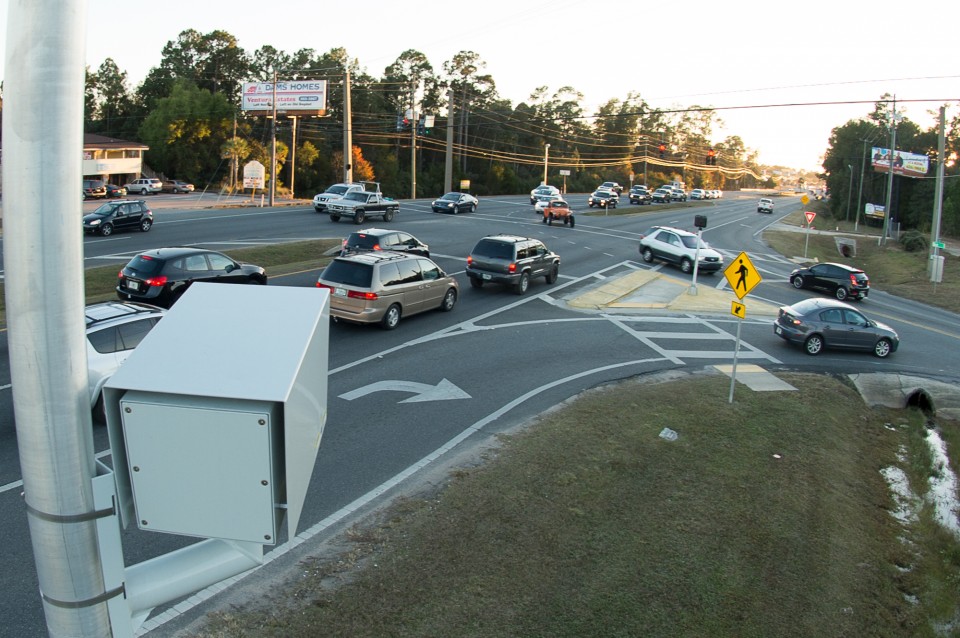 "All this growth put a lot of stress on our roads," said Lynchard. "And it's difficult to deal with because U.S. 90, through Pace and Milton, and U.S. 98 through Navarre and Gulf Breeze, are both state roads.

"And with U.S. 98 we are constrained by our geography, and we can't easily add capacity to 98," he said. "There are plans to six-lane 98, but it will be a very costly project."

Lynchard said the county's recent approval of a 6-cent gasoline tax will help Santa Rosa deal with mounting traffic problems, but annual revenues — estimated to be in the $3.5 million range — won't solve the major problems with U.S. 90 and U.S. 98.

"It's going to be an ongoing effort," Lynchard said of the county's transportation efforts. "As the county grows, and rural areas become more urbanized, it seems growth gets ahead of transportation infrastructure. You're always playing catch up."

One option that commissioners have talked about is placing a tax referendum on the ballot in 2016.

"We're going to have to have a local option sales tax if we're to keep our millage rates low and keep up with the demand for quality services," Salter said.

The tax would generate about $12 million a year that could be used for transportation, infrastructure, such as a new courthouse, and for parks and library improvements.

But it won’t be easy getting voters to approve the proposed tax.

Salter believes county residents can be persuaded to approve the tax, given the growing need for infrastructure improvements, and other recreational and cultural services 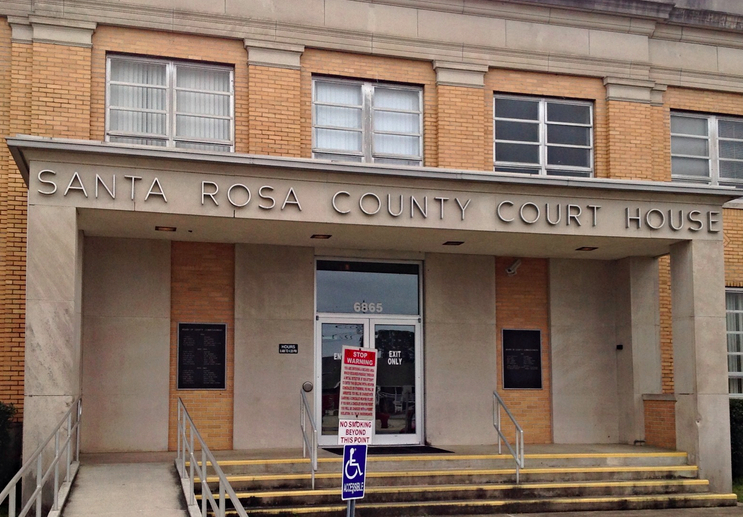 The current Santa Rosa County Courthouse in downtown Milton is badly in need of replacement.

At the top of that list is replacing the existing courthouse, a controversial project with a cost estimated at some $50 million.

Built in the 1920s, the current courthouse is out of compliance with the American Disabilities Act, in the Blackwater River floodplain and deficient in basic HV/AC controls.

The strains of growth

Bookout sees some demographic concerns ahead for her Gulf Breeze community and Santa Rosa County as a whole.

"I am a little bit concerned about the availability of appropriate and affordable housing for young people in Gulf Breeze," she said. "We're seeing the gentrification of downtown Pensacola, and its median workforce age drop, but we're not seeing that here in Gulf Breeze and Santa Rosa County.

"I've got three grown children, and I'd love nothing more than to be able to attract them to move back to Santa Rosa County," she said. "But will my children be able to afford to live in our community? There are not a lot of affordable apartments in Gulf Breeze."

While Santa Rosa's growth has been impressive over the past couple of decades, there are quantitative signs its growth is slowing.

The county’s unemployment rate has leveled out over the past several months. It is holding steady at 4.8 percent, but employment opportunities, as reported by the latest U.S. Census Bureau survey of individual Santa Rosa households, have been stagnant over the past 12 months, says University of West Florida economist Rick Harper.

Santa Rosa's population growth, however, continues at a healthy pace.

"For the nation the average growth rate is slightly less than 1 percent per year, so for Santa Rosa, its growth rate is double the national growth rate, and still growing at about 30 to 40 percent faster than the state of Florida," Harper said.

Despite the growth challenges Santa Rosa faces, Lynchard is optimistic the county's quality of life will be sustained and improved.

"Everything that's happening in the Panhandle, with the money flowing in from the RESTORE Act, I think some great things will be taking place in Santa Rosa County over the next 5, 10, 15 years," Lynchard said. "So, I'm optimistic. I'm not concerned about us going downhill as a county." 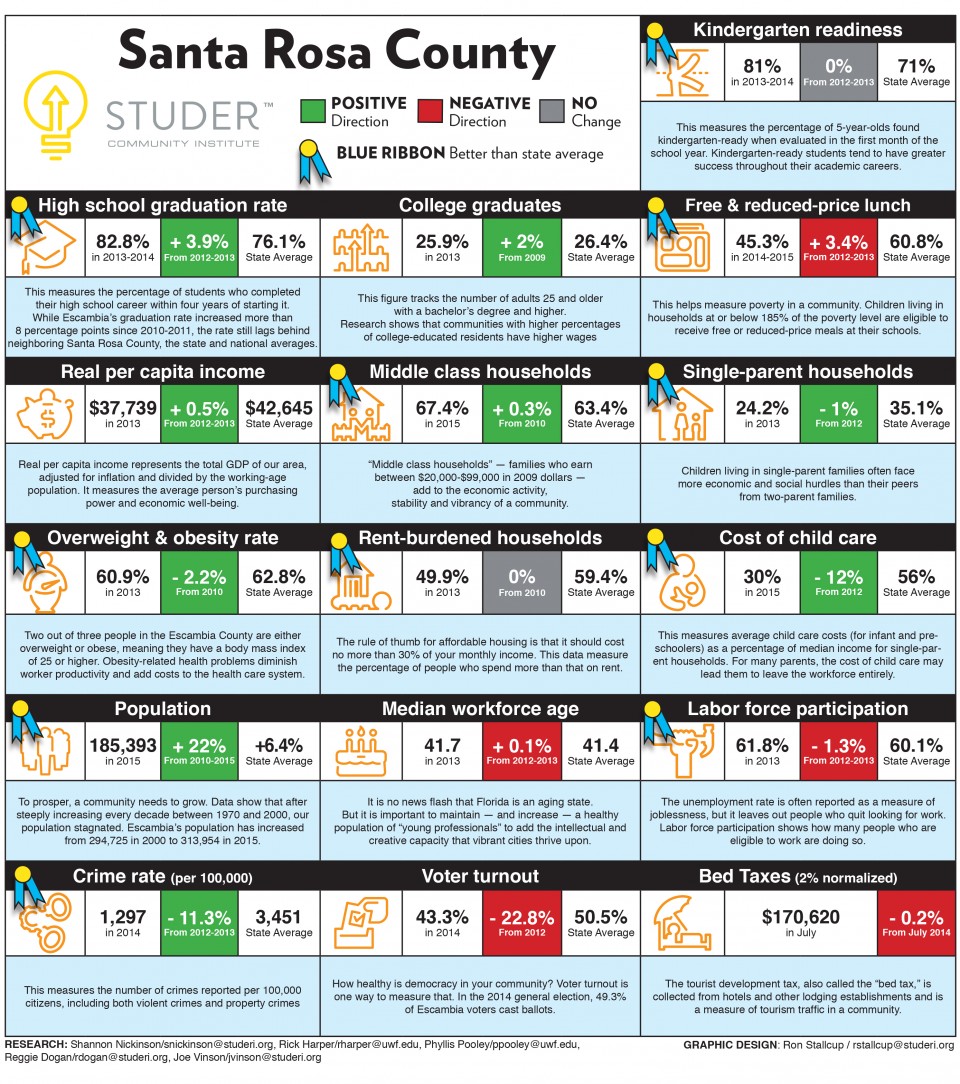