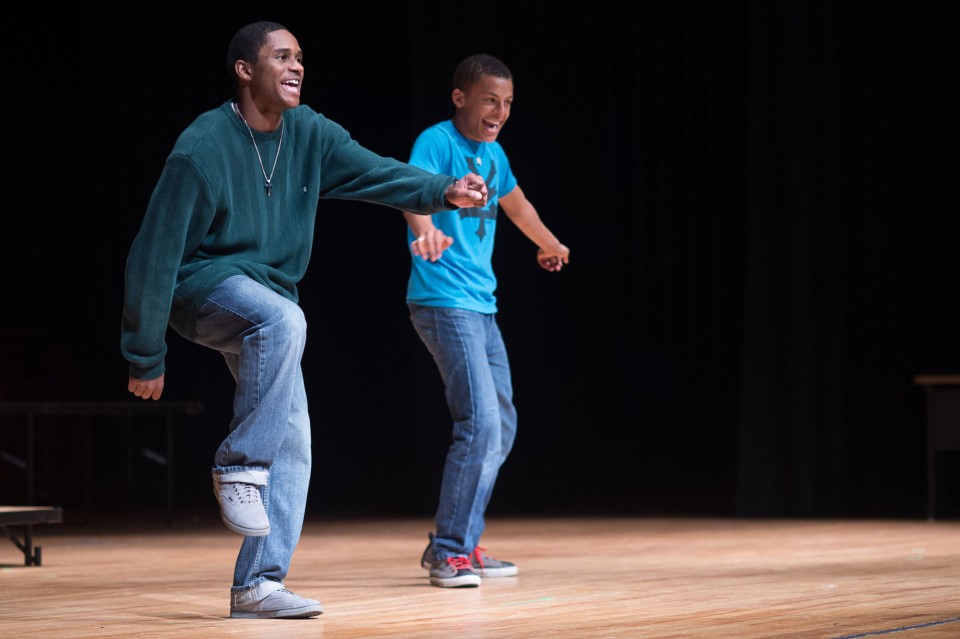 People like being around TaDarius Hall. His peers at Pensacola High School elected him to the Homecoming Court twice and voted him freshman class president. Kind, charismatic and wise beyond his years, Hall has been through a lot in his young life. “What I’m learning through my life is just because you’re impacted by something, doesn’t mean you’re affected by it,” Hall says. “That’s something that I will keep with me always.” Hall finds refuge at school. He appreciates the attention and love he receives from classmates and teachers. Given the realities of his life’s predicaments, it’s no wonder that theater is his favorite class at school. “I appreciate the love and everything I get from my school,” says Hall, as a humble smile broke on his face. “When I’m having a hard day, this is my way to escape everything, because I love being on stage,” says Hall in the auditorium where he enjoys his theater class. “I’ve wanted to be an actor since I was 3.” Hall is familiar with “hard days,” but you wouldn’t know it just by talking to him. He has many reasons on paper to be a statistic — another young man’s promise and future lost in the circumstances of his environment. But he isn’t that kid. He maintained an A average at Bellview Middle School, earning a recommendation for the exclusive, academically rigorous International Baccalaureate program at PHS. Longtime teacher and IB assistant principal Al Marsh first met Hall when he was working at Bellview and Hall was a student. Marsh says he quickly noticed a difference in Hall. At school, Hall always dressed well, unlike some of his classmates, where the boys wore sagging pants, and the girls like low-cut blouses. “He’s a perfect role model for the other students there,” Marsh says. “He is a cut above the rest.” Marsh knows well the neighborhoods — Montclair and Truman Arms — where Hall grew up. He has taught dozens of children from the same areas and knew Hall was special. “There is just something in him that shows he wants to excel,” Marsh says. “He wants to do the right thing all the time.” Marsh describes Hall as an all-around great person. “He’s a nice young man who I think is going to be successful at anything he takes on,” Marsh says. “I don’t know what it is that makes him do the right thing, whereas others coming from the same environment won’t do the same thing.”

Hall remembers the years he lived at Truman Arms, but they aren’t the best memories. Many days and nights he listened to sirens and watched cops make their rounds. “You have walls around you and you actually feel like you’re locked up,” Hall says. “So I tried to go out of Truman Arms as much as I could, to get out of the whole situation. I’ve seen people do things in Truman Arms that I just wouldn’t have imagined. It was just really difficult.” Hall’s mother was only 15 years old when he was born. She went to prison when he was 9 years old. That’s when he moved to the Montclair neighborhood to live with his grandmother, “Ms. Sandy,” until she died. “It was really, really hard, because there’s not one person on this earth that I respected and I loved more than her,” Hall says. “The reason I am the way I am is because of her. Once (her death) happened, I didn’t care about school, I didn’t care about my future.” With his mother in prison, his grandmother dead, and a father who “was there, but wasn’t there,” Hall fell into depression, made worse by the deaths of an uncle, aunt and other family members in a short span of time. Hall found purpose in school. He realized it in a strange way: While putting on his school uniform. “Would my grandma really want me to fail? If I’m really living for her, would she really want me to fail?” Hall says. “I felt like the school uniform (was a part) of who I was and who I was becoming. It changed my personality, it changed the way I looked at things, it changed the way I saw other people. School was like my outlet.” It was the change in Hall that inspired Marsh to recommend him for the IB program. Hall this year struggled in his math and science classes and is no longer in IB. But he still takes honors classes and maintains an A-B average, while holding down a service job. He is determined to pursue his dream. “I am so excited about college,” Hall says. “This year has not been my best year. I came to the IB program and Mr. Marsh and everyone else, they helped me out. They stuck their necks out for me. (But) I feel like I underestimated everything and didn’t take it as seriously as I should. I also feel it was a learning experience.”

Keeping faith in the next chapter

Hall now is focused more on his studies, as well as his acting and dance classes. His schoolwork inspires him, but his faith is the real flame that fuels his fire to overcome and succeed. “I got saved about two years ago,” Hall remembers, reaching for the cross pendant around his neck. “That’s a big decision. It’s a life-changing decision.” Hall knows the path ahead won’t be easy just because he has learned some hard lessons. He hopes to share his life lessons and inspire his friends and classmates, who look up to him. “For that kid who is out there and feeling like there is no hope for them, what you have to do is — it’s kind of blunt to say it — you’ve had to suck it up, and you have to keep going,” Hall says. “No one’s going to be sorry for you backing down. You have to keep pushing forward, and once you keep pushing forward people will take notice of that and God will open doors for you and he will use people in your life to push you forward.”