Holm accepts the challenge of students with special needs 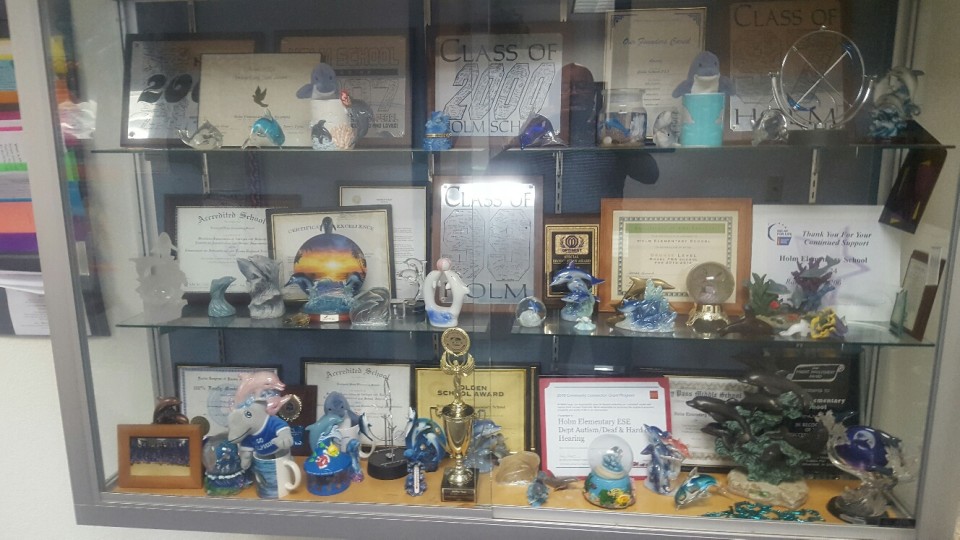 This is the second in a series of installments on the improvement plans principals are implementing at the 11 Escambia County elementary schools that received a D or F on the Florida Standards Assessment.

When it comes to serving students with special needs in Escambia County schools, there’s no place like Holm.

With 13 ESE classrooms, Reinhardt Holm Elementary School accepts students with developmental and learning disabilities — the physically impaired to autism to deaf and hard of hearing — from every corner of the county.

On Lanier Drive next to Workman Middle School — just north of Pensacola State College and the Pensacola International Airport — Holm draws students from as far north in Century and to west from Perdido Key near the Alabama state line.

The district pays cab fare for students who travel from Century nearly 100 miles round trip daily. 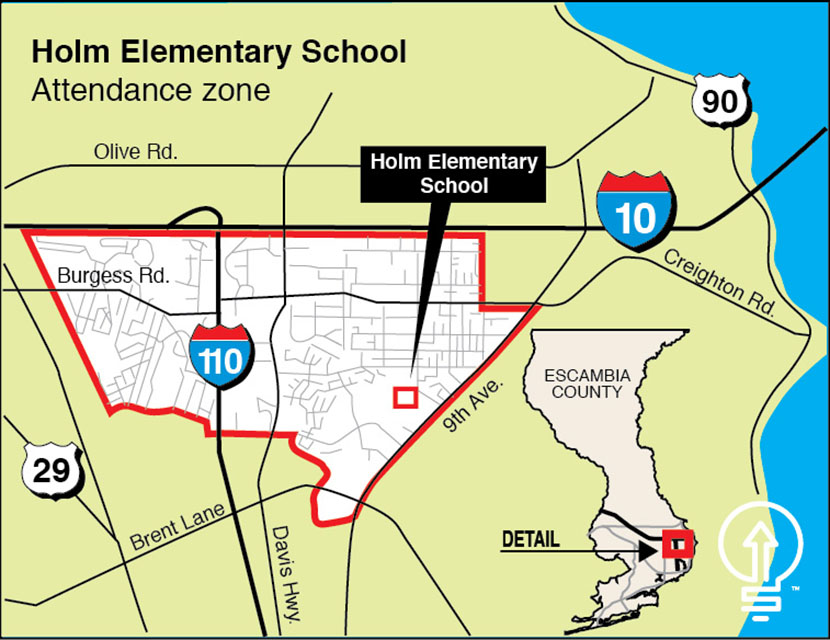 Holm also is one of 11 elementary schools in Escambia County that received a D or F on the Florida Standards Assessment.

“One of the challenges that we face is coming to school ready,” said Principal Debra Simpkins. “In kindergarten we’re having to teach all the alphabet, which if they had some preschool they would have been exposed to that.”

Learn how Weis Elementary is working to improve student learning from the earliest ages.

Learn how Global Learning Academy is striving to overcome the challenges of poverty to increase proficiency.

Learn how Lincoln Park Elementary is working to strengthen relationships among staff, parents and community.

Learn how Ensley Elementary is planning to boost math and reading skills as part of the school’s improvement plan.

Learn how West Pensacola Elementary is helping students and teachers get resources to improve academic achievement.

Learn how Montclair Elementary is reaching out to the community and increasing parental engagement to improve student achievement.

Research shows that kindergarten readiness is among the most important measures of a child’s academic progress. Children who are behind in kindergarten are more likely to be behind in third-grade reading, and they rarely catch up throughout their school careers.

And it shows that only 66 percent of Escambia’s children are ready for kindergarten. That makes it critically important that we invest in those children before they get to school. That means making quality preschool and early childhood education a top priority in our community.

With 40 teachers and just over 500 students at Holm, nearly a third of the students have some disability. The school doesn’t offer Voluntary Pre-Kindergarten, or VPK, but it does have four pre-K ESE classes.

Holm, outside the boundaries of the schools identified in the country's pockets of poverty, sits in a hodge-podge of residential and commercial development. About 90 percent of students at Holm, however, qualify for free and reduced-priced meals. 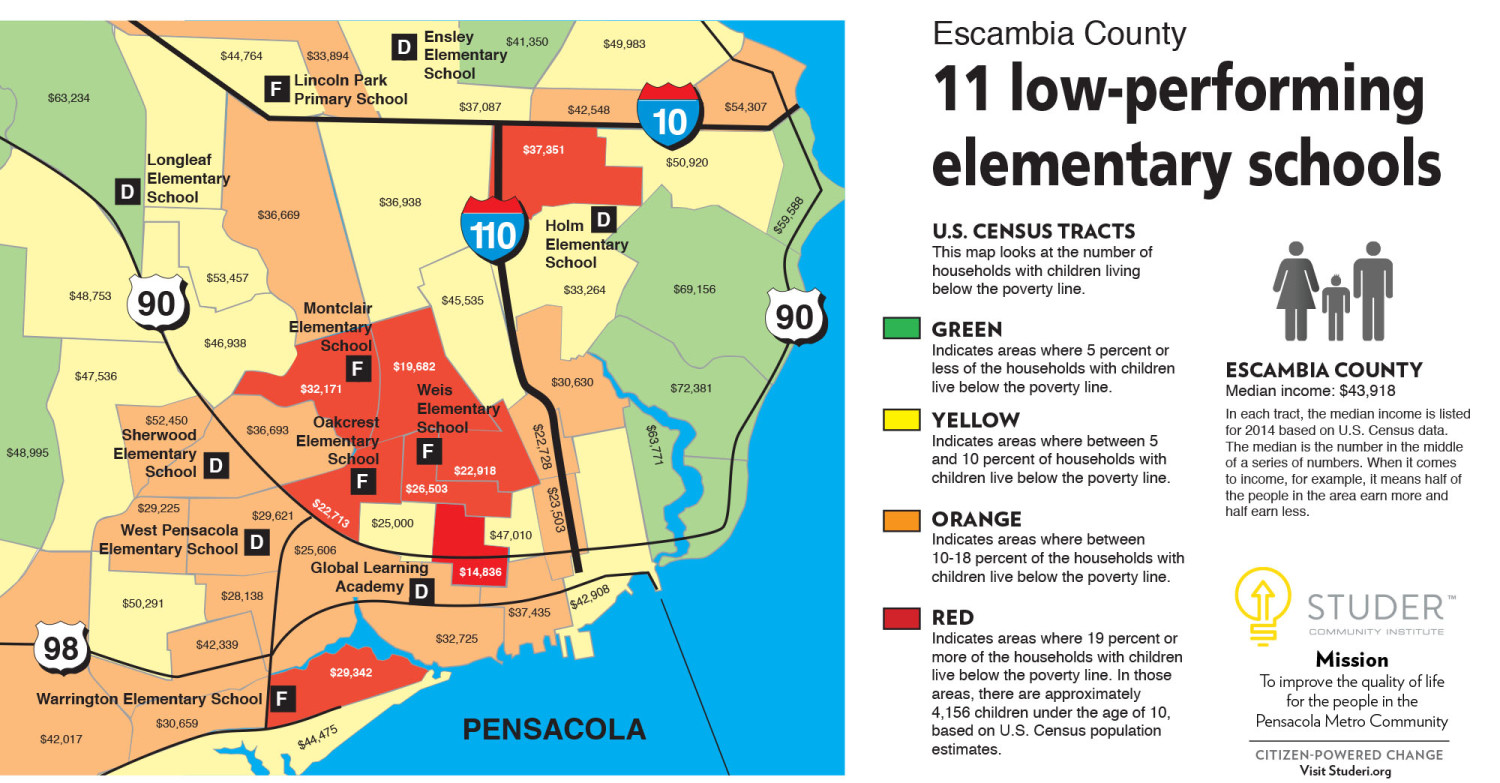 A map of the elementary schools graded D or F according to the Florida Standards Assessment. Credit: Ron Stallcup.

Susan Tapparo has taught at Holm for six years. Even though Holm received a D rating on the FSA, Tapparo said "we know it's not really a D school." Tapparo believes so much in Holm's mission and value that she enrolled her 6-year-old daughter in a first-grade class.

“One of the best things about our school is how we care about our students and try to meet the needs of everyone here because we have such a diverse population,” said Tapparo, formerly a literacy coach and now a resource teacher. “A lot of students are here because their parents choose to bring them here through the School of Choice program. Holmes has been rated a D but we know it's not really a D school.” 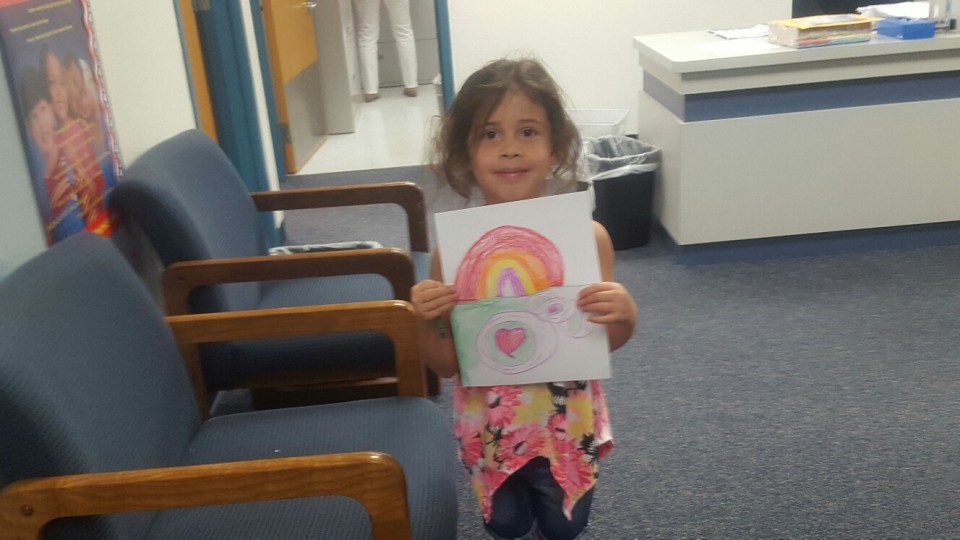 Simpkins has been with Escambia County schools for more than three decades, starting as a math and science teacher. She left the classroom to work as an administrator in staff development. For the past few years, she’s been either an assistant principal and principal at different schools.

As a principal, Simpkins has seen firsthand the challenges that come with working in a school that serves disadvantaged and disabled students. She also knows that students from impoverished homes can succeed in school.

Simpkins was assistant principal and principal at Spencer Bibbs Elementary School in 1999 when it was among the only two schools in state to receive a F under the state’s controversial standardized testing and grading system. She witnessed the now-closed school rise from an F to a B, giving credit to dedicated teachers and a committed community. 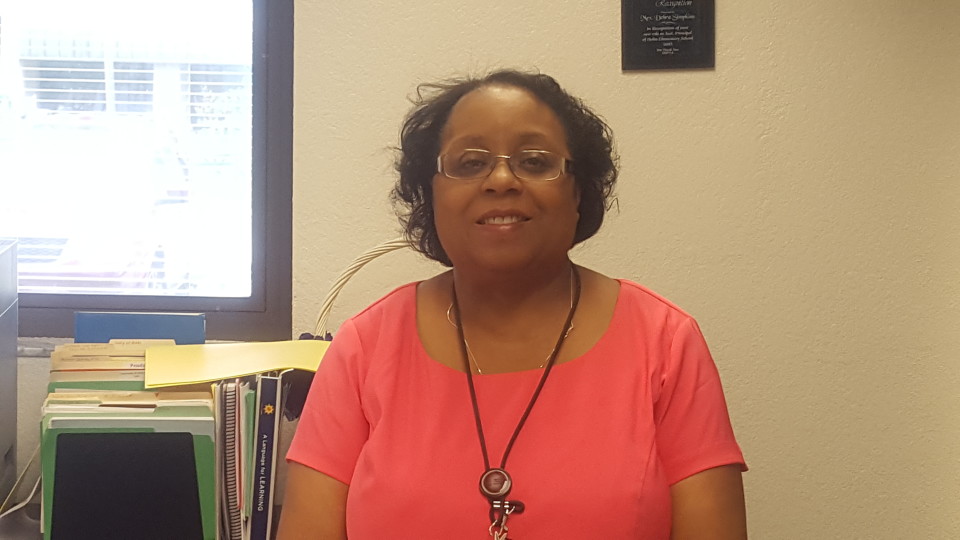 The key, Simpkins believes, is changing the mindset of both teachers and students.

Another challenge, no less daunting is getting students to school on time. One student was late 62 times out of 180-day school year.

Excessive tardiness is a big problem and causes students to miss out on crucial “bell-to-bell” instruction, Simpkins said.

“We’re trying to address this because we’re seeing that the ones that that we tend to retain are the ones that are tardy consistently,” she said. “When you’re having 62 tardies in a year, that quite a lot of tardies, and we’re addressing that.”

Simpkins started “no tardy parties”, which are unplanned, unexpected socials that include ice creams and snacks for students who’ve been on time to school.

Even if some of them wanted to get to school on time, there are issues with transportation, and the parents have a hard time getting their children to school on time everyday, Simpkins said.

“It helps a little bit with the peer pressure because we have the parents that come in and say ‘My child is mad with me because they may miss the no-tardy party, and they say it's my fault.’

“It helps parents understand how important it is to that child and they want to be here. We have a lot of kids who will say it's the parent's fault.”

Getting students to school on time is a part of the school’s overall improvement plan. Part of the plan included an extended say, which means schools stay open longer to give students more instruction time.

One of the strategies that Holm will use in the coming year is moving read blocks to a later time in the morning to help students who arrive late from missing reading.

To increase parental involvement, Holm has math days for parents to come in to learn what the new math entails.

“We have a day where they’re invited and actually participate in the math that their student is doing in that classroom,” Simpkins said.

The school also offers reading nights and reading activities for parents to participate in after school.

Technology night gets parents engaged in the latest technological advances in school. They talk about the child’s passcodes and are able to access the math program online to see how well their child is progressing.

“We try to hit those areas so that parents are aware of what’s going on with their child,” Simpkins said.

With a background in math, Simpkins is her own data specialist. In her office, piles of data are at her fingertips as she reaches for stacks to show how she uses progress monitoring to keep students on track.

“We’re looking at some quarterly assessments and we’re also looking at monitoring those students who need to make learning gains,” Simpkins said. “We have data meetings on a monthly basis where we say, ‘OK, tell me where Johnny is.’” We specifically name the students and specifically pinpoint what we need to for improvement.”

One area that Simpkins has under control is discipline. Teachers wrote only five referrals the entire year in 2016, Simpkins said.

Using the Positive Behavioral System, or PBS for short, teachers emphasized a preventive, whole-school approach. PBS entails a set of strategies or procedures designed to improve behavior by using techniques that rely on more rewards and fewer punishments.

“The teachers buy into what we're trying to do here,” she said “Instead of focusing on the negative, we'll focus on the positive.” 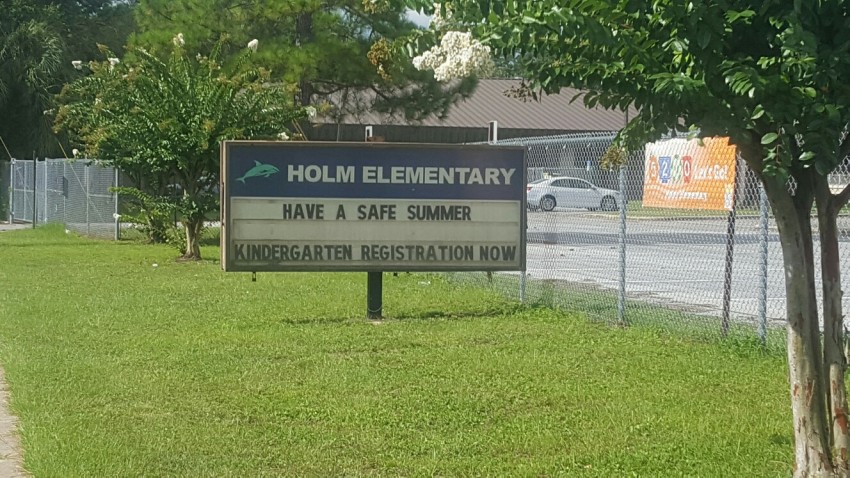 At Holm Elementary, Simpkins and her staff are dedicated to taking any and every student across the district and giving them the tools they need to function and succeed in the classroom and beyond.

“The biggest challenge is working with the boys and girls from where they are to move them forward,” Simpkins said. “I'm passionate about it because I believe that they can do anything that you set expectations for.”