The foundation for learning begins long before elementary school 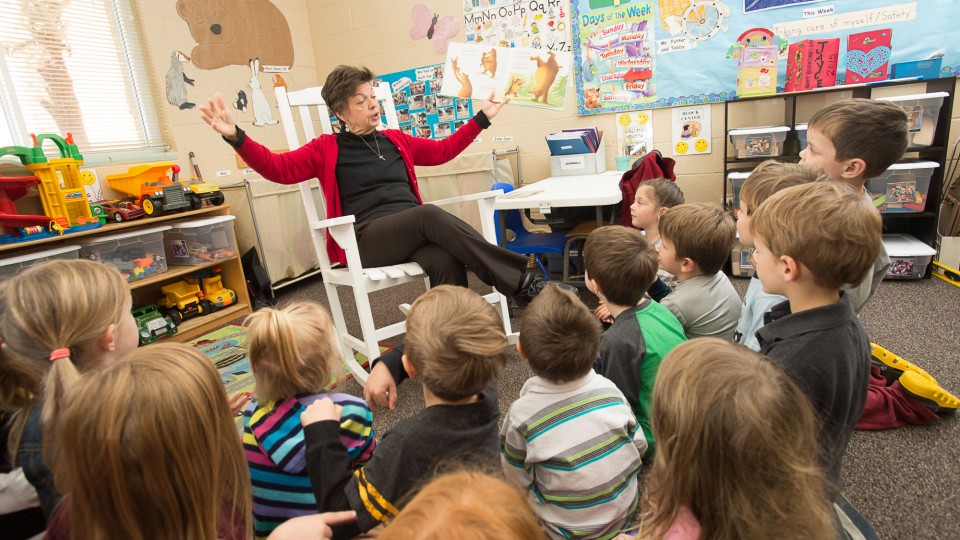 Research at Florida State University. It showed how children learn to recognize letters, read words and comprehend what they see on a page.

“Our motto has been for years, ‘Every student, every day, whatever it takes,’” she says. “We’ve created an environment where parents feel invited to our school.”

It didn’t happen overnight at Oakcrest Elementary School, which got a school grade of F in 2006. Former Principal Denny Wilson worked to change the culture at Oakcrest, which earned an A in 2011 after years of gradual, steady improvement.

One thing that helped Oakcrest was having a family and community liaison on campus. This year, that job belongs to Rodney Ford.

In his position, Ford does everything from helping parents fill out insurance paperwork to walking a child from his home to school to making sure he gets there. Oakcrest and Global Learning Academy are the only two district elementary schools with a job like Ford’s.

“I have found that at Oakcrest, my position is needed,” Ford says. “I would hesitate to say what another school needs, because I don’t know their needs. But my day is full.”

Part of Ford’s job is to build trust among parents who may not have had the best school experience themselves. Because like all good educators, he knows that getting a parent engaged in a child’s learning is a critical component of making that child a success in school.

“If they had a bad experience, it can be hard to overcome,” Ford says. “But I would say that is true not just for our parents, but for most parents.”

Often the foundation of strong parent involvement is laid in early childhood. Yet, for years, early learning has languished in purgatory, viewed as somehow less professional than traditional K-12 schooling in the conversation about improving our education system.

That, experts say, has to change.

“That’s the whole point — 0 to 3 is the most impactful,” says Dana Suskind, a pediatric surgeon at the University of Chicago Medical School. “Eighty-five percent of your brain is grown at that time. It is the basis of everything that comes after.”

Suskind heads the Thirty Million Words Initiative, a group that leads research into how young children acquire language — and what strategies can help their parents become better teachers. Her high profile earned her an invitation to a White House summit on early learning last year.

Research being done in Northwest Florida also supports the notion that building a better reader begins before age 5.

Jeanine L. Clancy is a senior research associate at the Florida Center for Reading Research at Florida State University. Since 2010, FSU researchers have been studying how young children learn to recognize letters, read words and comprehend what that they see on the page.

The Florida Center for Reading Research’s project is funded through the Institute of Education Sciences (the research arm of the U.S. Department of Education) through a five-year, $100 million-plus grant that began in 2010. Six research teams are participating in the new Reading for Understanding Research Network. FSU’s share of the pie is $26 million to study why some children struggle to comprehend what they read.

Christopher Lonigan, the center’s associate director, said when the grant was awarded, that much of the research in the field in the last 30 years has focused on how children decode letters into words. This project will focus on how to help children turn being able to say those words into understanding what they mean, and on strategies that teachers can implement in classrooms in fairly short order.

Some of that research includes children in Escambia and Santa Rosa counties.

Clancy says researchers have worked in classrooms from preschool to fourth grade.

Clancy said the project is supposed to end this year, though they hope to get another year of funding. Preliminary findings show that intervening early can boost a child’s vocabulary and language development skills.

“When children are in school and reading, if they don’t have any background knowledge on a topic, they don’t have anything to connect their new learning to. It just hangs there,” Clancy says. “If they’ve never been to a zoo or heard about a zoo, reading about animals in a zoo isn’t as meaningful.”

This year, researchers are focusing on second-graders. Last year, preschoolers at Trinity Learning Center in Pensacola were among those participating in the study.

Anna Kay Shirah has been director of Trinity Learning Center for nine years. She also has six years of work experience with Title I early learning programs for the Escambia County School District.

She jumped at the chance to participate in the study.

“Anything we could do to promote literacy, I fully support,” she says.

In kindergarten readiness scores, Trinity Learning Center typically scores in the high 80s and 90s. There were children at the center who Shirah believes could have benefited from the extra intervention the researchers offered. Of 30 children, only the parents of eight or nine agreed to participate.

“I don’t know if they didn’t understand it, or if they didn’t want to,” Shirah says. “It could only help your child, and you don’t get that kind of expertise brought to you on a plate essentially.”

Students who did participate got extra help through weekly, one-on-one visits or in small groups working on reading comprehension and listening skills.

The researcher would read a story with a small group, and ask the children questions about what she had read to help gauge what they remembered about the story and how they put that information in context.

Because the overall study is not completed, Shirah has not heard from the researchers how her students fared. But she is eager to see the results.

“I would love to know and see what happened so that we can know what we are doing right and what areas they found that we can do better in,” she says.

The challenge of bringing parents to the table is one that Bruce Watson knows.

Watson is executive director of the Early Learning Coalition of Escambia County, the umbrella agency that runs the state voluntary prekindergarten and the School Readiness programs locally.

Watson said getting parents to participate in after-school events has been “problematic at best.” The coalition used to host parent involvement events once a month or so, but attendance was so poor, they stopped.

“I think our efforts are going to have to increase,” Watson says. “One of the traits of people who are reliant on our services is apathy in doing the things we are talking about. That doesn’t mean you can’t endeavor to try … because every child saved is worth the effort.”

The School Readiness program offers subsidized daycare as long as the parent works at least 20 hours a week and makes less than 150 percent of the federal poverty level, which for a family of four is $40,000 a year.

The coalition has 185 School Readiness providers and 95 voluntary preschool providers under contract.

The waiting list for School Readiness is 1,200 children, Watson says.

Which means, considering the low return on investment Watson has seen in putting on parent nights and the like, he’d rather spend the money he does have on getting a child off the waiting list and into childcare.

But cracking the code to creating strong parent involvement is key to helping this community’s kindergartners show up ready to learn.

Malcolm Thomas, Escambia schools Superintendent, says getting into churches, community centers, and similar places to help young parents get the skills they need — and may lack — is crucial.

“From 1 to 4 that’s where we’re losing ground,” Thomas says. “Their language development, their vocabulary, that is the key.”

He recalled visiting a school and asking a first-grader what she was reading about, and she couldn’t grasp the word “hedge.” She had never heard the word before.

Ashley Bodmer hardly goes through a workday without referencing the word-gap study that Suskind’s group draws its name from.

“Putting a child in front of a TV is not the equivalent of interaction with a live human being,” Bodmer says. “Differences in vocabulary are evident as early as 18 months.”

Bodmer is executive director ECARE — Every Child a Reader in Escambia. The nonprofit was launched in 2006-07 by the business community to help get kids ready for school.

ECARE works with childcare centers in the neighborhood that feed into Global Learning Academy. They are on track to help 130 kids this school year. The goal for next year is 200.

Brenda Dean, owner and director of Come Unto Me Little Children preschool on T Street, told ECARE volunteers at the group’s annual breakfast that ECARE’s work with her center has helped her do so much more for her students.

“Without … ECARE, I just don’t understand how I would be able to give the kids what they need in order to improve their vocabulary and phonological awareness,” Dean said.

ECARE’s influence even has changed the kind of Christmas presents that Dean gives to kids.

“A lot of times ­— and I’ve been guilty of this in the past ­— we will buy a toy before we buy a book, but that has changed,” Dean says. “Now for Christmas we give out books because we want to make a difference.”

Back at Oakcrest, creating a culture of family involvement remains a work in progress, Principal Bonifay says.

The school has 700 students this year, including four preschool classes, two of which serve kids with special needs.

That means going to parents where they are to help schedule appointments to get kids glasses or go to the doctor, hosting regular family nights at school that often include dinner, even having parent-teacher conferences at football or basketball games if needed.

“Our families struggle in the school environment,” Bonifay says. “When they were in school, they may not have had a good experience and they struggle with the jobs that they have.”

But Bonifay and her staff never stop trying to build those bridges, especially among the parents of their youngest students.

“(The pre-k teachers) meet with the parents often,” Bonifay says. “Early literacy, that’s our building block. We want our parents to read to their children, to have conversations with them.”

Suskind says the impact of the absence of those early literacy skills can seem almost invisible, but it has lifelong consequences.

“People just don’t see it,” Suskind says. “As long as it’s not a toxic environment, all 0- to 3 -year-olds look the same. They smile, they react.

“It’s not like poor kids don’t learn to talk, they do. It’s developing the language for school and the brain connections for school that don’t develop as quickly.”