The work we still need to do 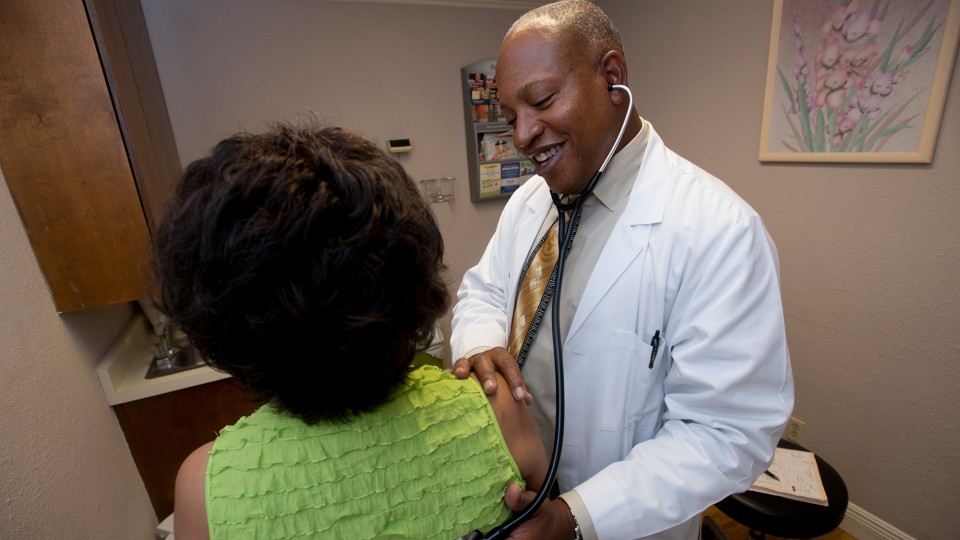 Doctor with a patient
If you live and work in Escambia and Santa Rosa counties, on average you make $8,000 less than the typical American worker. But if you lived and worked in the Pensacola metro in 1970, you made $2,200 more than the typical Florida worker, and almost as much as the typical American worker. That is the economy of Escambia and Santa Rosa counties in 2014. And based on predictions about the kinds of jobs that will grow in the next six years, it could be our reality for some time to come. As the service economy rose and the manufacturing economy declined in the last 30 years, so went the standard of living. “We now produce more stuff, but we do it using fewer people, and this is true both in manufacturing and in the military,” says Rick Harper, director of UWF’s Office of Economic Development and Engagement. Moving forward, the drivers of our local economy will be service jobs that can’t be outsourced, but often don’t pay that well. Of the top 10 jobs that are predicted to grow locally between now and 2020, five are service-related — customer service, retail sales, janitorial services, food prep and nursing assistants. When jobs offering a “living wage” do come to town, too often employers struggle to find enough qualified candidates. In March, the Greater Pensacola Chamber, Pensacola State College and George Stone Technical Center partnered to host a job fair for 300 openings at ST Aerospace, an aircraft maintenance company moving to Pensacola. At the fair, 330 people turned out; only half met minimum requirements for employment. “Workforce education is one of our primary objectives,” says Chamber President Jerry Maygarden. “We’ve commissioned a gap analysis for what are the jobs of the future. It can be a game-changer.” It will need to be, as low educational attainment and the poverty that often goes with it have plagued this area for 30 years.

Education is the key and the hurdle

The impact of generational poverty on the community’s economic and educational prospects is reflected in measures such as the free- and reduced-price lunch rate — which in Escambia County is 62 percent. “When I became superintendent it was in the 57-58 percent range,” says Superintendent Malcolm Thomas. “(Now) we have people who have to lean on free- and reduced-rate lunch who never thought about doing that before.” Look at schools that get poor scores on state standardized tests. Most often they serve low-income neighborhoods. The Florida Office of Early Learning says on average 33 percent of Escambia 5-year-olds are not ready for kindergarten. Often those children come from poor families. “Poor kids can learn,” Thomas says. “The way poor kids learn is that poor parents must understand the value of education. They promote it and they push it. Neither of my parents had a high school diploma. There were times my mother couldn’t help me with my homework, but she made me do my work because she understood the value of getting an education.” Then he tells of a recent example in which a grandmother raising her grandson called him on a Friday to ask for his help. Her grandson got a job at a fast-food restaurant and was going to quit school, as he had just turned 16. Thomas reminded her that the boy could only do that with her written permission. He asked her for time to talk to the principal so someone could talk to her grandson on Monday to persuade him to stay at school. But Monday came and the student wasn’t in school. Then came the letter from the grandmother, signed, giving her grandson permission to drop out. “Many of these students who are at risk … their families are at-risk,” Thomas says. “They aren’t always seeing education through the same lens. I’ve had them tell me, ‘I didn’t graduate from high school and I turned out OK.’ I tell them the world is a lot more complicated than it was back then.” Also holding the area back — high school graduation rates that are 64 percent overall. The state average is 75.6 percent overall. Harper says creating a quality labor force that is “trained well across the breadth of the community,” and capitalizing on our environmental and cultural amenities, is the key to reversing population decline and improving the job outlook. The biggest improvement we could make to ensure long-term growth? “Turning out literate and numerate 4-year-olds who are ready and enthusiastic about learning,” Harper says.

Poor health holds us back

Maygarden, who spent 30 years in the healthcare industry, believes that businesses have to understand the link between poor health, lost productivity and the bottom line. For example, three missed days out of 30 work days is a 10 percent loss of productivity. Employers look at three things when determining the basic cost of health insurance: the health of a population, absenteeism and productivity. “We believe a better educated, healthier workforce is the single most important attraction for business and industry,” Maygarden said. If that is true, we are starting out behind. Smoking and obesity cost Escambia and Santa Rosa employers $800 million in 2013, says David Sjoberg, who heads the Partnership for a Healthy Community. The costs of an unhealthy workforce are realities that employers must deal with. It is a reality that has confronted the Santa Rosa School District, one of the largest employers in that county with 2,634 employees. Karen Rutherford is human services and risk management manager for the Santa Rosa School District. “It is a problem and the only way to truly lower health costs is to lower the claims,” says Rutherford. “We’ve done some wellness initiatives. We do an annual health screening. We do think we’ve turned the corner, but it is typically three to five years before you see any benefit from implementing it.” Diseases most prevalent here are heart disease, diabetes and high blood pressure. These are things we have the power to reduce through behavior. It will be a long row to hoe. Dr. Earl Crosswright, a native Pensacolian and family practitioner, has been practicing medicine for 21 years. He sees an average of 1,500 patients a year. In an average day, 70 percent of the patients he sees have hypertension, diabetes and obesity issues, conditions that can cost between $150 and $500 a month in medications to manage. Though Crosswright sees these diseases in older patients, more frequently, they are appearing in young people. “With fast food and soda consumption we’re seeing the weights escalating, and there’s a direct correlation with obesity and diabetes and hypertension,” he said. Escambia County Health Department data shows that 18 percent of our students are obese based on their body mass index and another 16 percent are considered overweight. The story is the same in Santa Rosa County, where 30 percent of students are considered obese or overweight. Debbie Price, the school health coordinator for the Santa Rosa Health Department, says programs are in place to help build better health habits in youngsters, habits that hopefully will carry over into adulthood. The district has been measuring body mass index for students in first, third and sixth grades since 2007, with minimal improvement, Price says. Seeing the fruits of that investment takes years. Crosswright believes tackling the problem means changing our behavior and culture around food throughout the whole community. For example, he said, when food is part of our community or church life, add more fruits and eliminate the cookie table. Build parks with equipment that encourages kids to move. Reinstitute physical education classes every day in public schools. Make sure folks at all income levels have access to full grocery stores with a good selection of fresh foods. Healthy eating is more expensive, something that cannot be discounted in an area with traditionally low wages.

A well-educated workforce is undoubtedly a key to raising the standard of living for more residents of Northwest Florida. Of the top 10 jobs forecast to grow in the two-county area, only half require education beyond high school. But a workforce whose skill sets stop growing after high school is not nimble enough to respond to changes in the economy. And it certainly isn’t likely to draw a paycheck that builds long-term security. Harper says that 32 percent of the local workforce earns $32,000 a year or less. Of those same top 10 jobs, only four  — licensed practical nurses, registered nurses, elementary teachers and post-secondary teachers — have average annual salaries above the $32,000 line. Or look at it this way. In 2012, Habitat for Humanity built 211 new single-family homes, making it the most productive Habitat chapter in the nation, says Executive Director Tim Evans. A salary of $32,720 qualifies a single person for a Habitat house, said Peggy Fowler, neighborhood revitalization initiative coordinator for Habitat. For a family of two, the maximum income is $37,440. So if you think that Habitat homeowners are all “low-income people,” Fowler said, “our teachers would then be low-income. Our policemen would be low-income. That’s who many of our people are.”