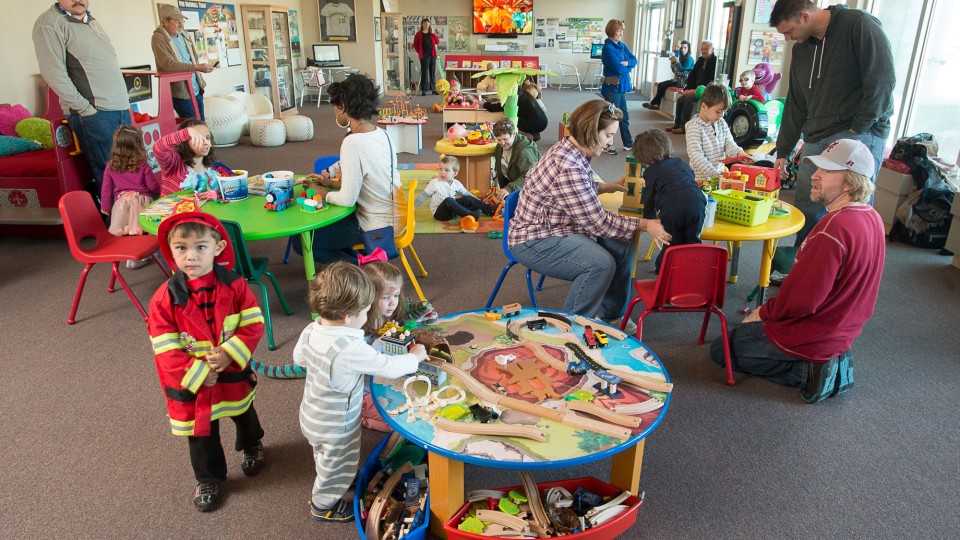 Children in class with parents

Lydia Weeks’ favorite place to hang out is with Super Why. Her mom, Monique Weeks, brings Lydia, 2, to Super Why’s place — also known as WSRE’s Imagination Station. “I like that it’s free, it’s clean, and they have tons of toys, different toys that we don’t have buy,” says Monique Weeks with a laugh. “She talks about this place all the time and on Sunday she’s like, ‘Mom, we go see Super Why?’” The center is basically PBS programming come to life. Many of the characters and educational themes come to life through interactive games, touchscreen computers and toys. The team behind the project, led by Jill Hubbs, WSRE’s director of education and outreach, has worked to make it a place that parents can enjoy too. At Imagination Station, Weeks, recently transplanted to Pensacola by the U.S. Air Force, reads to Lydia, sometimes while sitting in a small fire truck, one of the many unique ways parents may interact with their little ones. Imagination Station is a one-of-kind interactive, PBS learning center that opened at the Community Maritime Park stadium in 2013. Since then, there have been more than 16,000 visitors. It is open Monday, Wednesday and Friday to the public and during Pensacola Blue Wahoos baseball games. Hubbs designed the activity center with preschoolers in mind, but parents are very much welcome. “It’s a great way for parents and kids to come into a relaxed atmosphere and spend time reading together or playing with the dinosaurs or doing the touchscreen computers too,” says Hubbs, who taught kindergarten and first grade for years. The center shares space with the Pensacola State College Learning Lab and a baseball museum that allows visitors to see the memorabilia collected during WSRE’s making of the documentary “Baseball in Pensacola.” Local learning centers, Head Start providers, ARC and other groups use it for enrichment. Its profile may have been low, but it is growing daily. It has even gained national attention. Last October, the project won the National Educational Telecommunications Association award for Community Engagement Based on a Local Project. At the NETA conference in October in Tampa, Hubbs will speak about Imagination Station. She also has been invited to speak about the project at an annual PBS meeting in Austin in May. “Parents are so grateful, we get thanked constantly, and then they bring their friends, so it’s a good feeling,” Hubbs says. “It’s also good because it makes people realize what WSRE does. Our mission is education. We’re committed to our community, and it’s just a great way to showcase that.”

Educational groups with a focus on early intervention and children with special needs are now regular visitors at the center, including Autism Pensacola and Capstone Academy. Aileen Ilano teaches a special education preschool class at Capstone Academy. Many of her students have autism spectrum disorder. “I love that it’s very similar to a classroom setting,” Ilano says. “They have educational toys and books. They love the touchscreen computer with the interactive games.” Ilano plans a trip to Imagination Station once a quarter so parents have time to come. She says the time is invaluable. “If a parent comes, it allows for more one-on-one time,” Ilano says. “They love it and the children have a difficult time leaving.” That is music to Hubbs’ ears. “There’s no better feeling,” Hubbs says. “That’s really what it’s all about, the importance of the early years and just seeing that interaction.”

Richard Roselli often brings his 3-year-old granddaughter, Gracie Garman, to Imagination Station. Gracie says one of her favorite things to do here is “play on the computer.” “It’s a good place to bring kids,” Roselli says. “I usually see three or four families with one or two children each time we visit.” The center is not just a safe, fun place for young children to learn. It helps WSRE fulfill its commitment to learning at all ages. Parenting skills workshops have been hosted there. Teachers have had continuing education sessions. Schools have contacted Hubbs about hosting family literacy nights at the center. Pensacola State College has hosted financial literacy workshops for adults there and plans call for more similar events. The center’s fun, nonthreatening atmosphere makes it a safe space for lifelong learning, including continuing education classes, self-help courses, parenting skills, even GED classes, Hubbs says. With more support, she says the program could be expanded. “It’s limited in Pensacola,” Hubbs says. “We just need to do more things to invest in young children. It sounds cliché, but it’s the truth: The children are the future and a solid foundation in early childhood is the most important thing for success in school.”