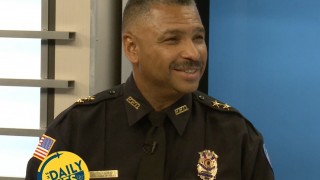 PNJ reporter Kevin Robinson wrote an excellent profile of Pensacola’s new Chief of Police David Alexander that the newspaper posted on its website over the weekend.

Today Robinson has another interesting story, this time about the Lumon May traffic stop.

After people saw a video of the traffic stop that the PNJ and other media outlets posted on their websites, many people posted comments on social media asking why the Pensacola Police Department didn’t take action against the Escambia County Commissioner.

Robinson obtained a copy of the Pensacola Police Department’s administrative review, which has a quote from officer Caitlyn Grantham, who pulled over May:

“Lt. Eagerton advised that we did not take any action because May is an Escambia County Commissioner and politics play a role in our job.”

Eagerton was the shift commander when May was pulled over.

The report was signed by Eagerton and Grantham. While some people may criticize the officers’ decision, it’s refreshing the officers and the police department are being transparent.

For Alexander, who is Pensacola’s first black Chief of Police in the 194-year history of the department, this obviously isn’t the kind of incident he was expecting to dominate the local news as he stepped into his new job.

But after reading Robinson’s profile of Alexander, I get the sense that our new police chief can handle the controversy.

It’s interesting, as the PNJ profile points out, that Alexander is a graduate of Escambia High School and attended the school during the race riots of 1976. A student body vote about the use of the Confederate flag and the school mascot name Rebels instigated the riots. The day after the vote, hundreds of white students gathered around the school’s flagpole and attempted to raise a Confederate flag.

For the next four hours, black and white students fought. Four students were shot and 30 were injured, including the football team’s quarterback, according to Pensapedia.

The Escambia High race riots are one of our community’s low points. Forty years ago, it didn’t seem possible that Pensacola would ever have a black police chief or city councilman or county commissioner. It’s ironic, actually fitting, that Alexander became our police chief during a year when so many statehouses and cities decided to remove the Confederate flag from government buildings.

Alexander also appeared on BlabTV’s “The Daily Brew” to talk with co-hosts Mollye Barrows and Carly Borden about the controversy surrounding the May traffic stop.

His insights about race and what is happening in Pensacola and throughout the nation are very insightful. After watching this segment from “The Daily Brew,” I have to say the mayor and city council made a great decision to appoint Alexander.

Our new police chief comes across in this interview as the right man at the right time for Pensacola.