Pensacola moms spent nearly two years on the front lines of research to help change the trajectory of young children from the very first days of life.

The research was part of a partnership between the Studer Community Institute and the TMW Center for Early Learning and Public Health at the University of Chicago. It tested if a video lesson called TMW Newborn could be an effective learning tool for mothers.

The Newborn video lesson aims to boost what a moms know about their child’s early brain development, and then increase their knowledge of the power that language has to build an infant’s brain.

The study showed that the video lesson can work.

— If the video lesson impacted parent knowledge of infant language and cognitive development.

— If it impacted what parents knew about the importance of the universal newborn hearing screening.

— See how the video lesson could fit into the context of regular maternity care.

In all, more than 5,800 parents were offered the chance to be part of the study. Of them, 2,467 Florida women were offered participation in the study and 1,333 completed the study, which wrapped up in fall 2019.

“Crucially, this study has also informed the model for implementing the 3Ts Newborn intervention in the context of regular care, which is critical in achieving population-level changes in young children’s language development outcomes,” the final study reads.

In TMW Newborn, moms are presented a survey on an iPad. It asks them questions about how babies’ brains develop and how they learn and process language. Moms are then shown a video that highlights some key teaching points about how parent talk and interaction influences a child’s brain development.

Then moms are asked the same questions again to try to see what they learned from the video.

The findings so far:

The TMW team presented a poster at the Society for Research in Child Development conference in Baltimore in March 2019, based on preliminary analysis of the moms who were part of the group.

The findings — of which Pensacola-area moms were an instrumental part — will be used in the TMW Center next project: a five-year, $2.5 million communitywide demonstration project in collaboration with the Children’s Services Council of Palm Beach County, (Florida). The goal of that project is reach 10,000 families with young children over the duration of the project. 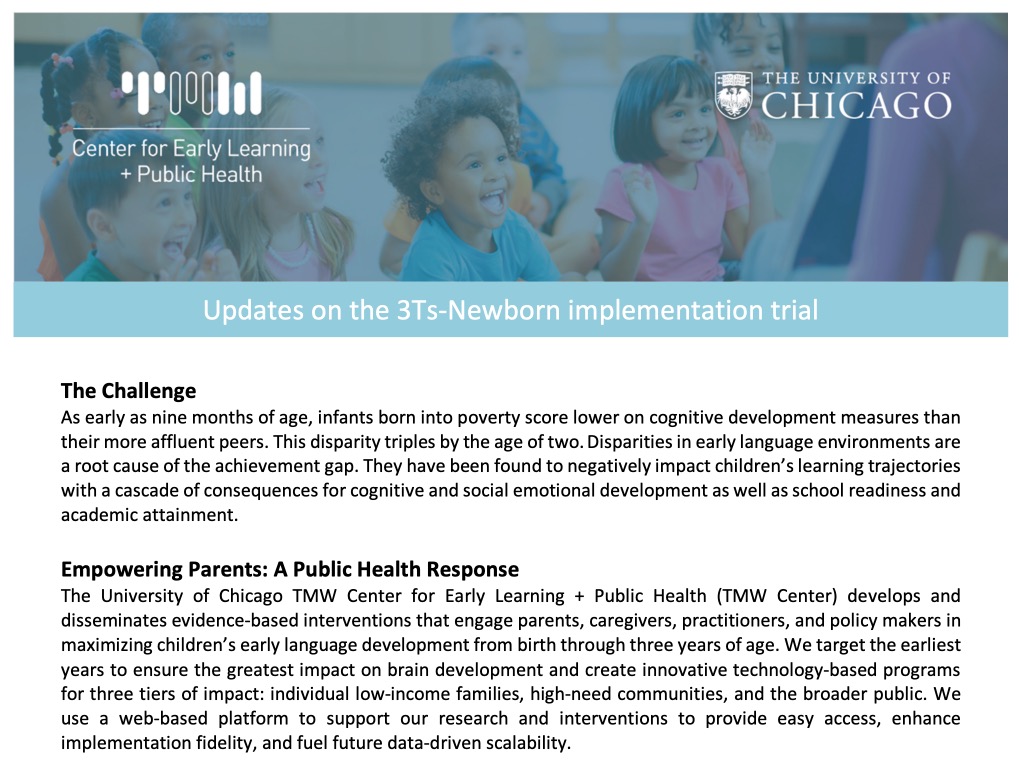 Updates on the 3Ts-Newborn implementation trial

A two-year research project shows video lesson can be a powerful tool to teach mothers.