Improving graduation rates is a boost for the economy 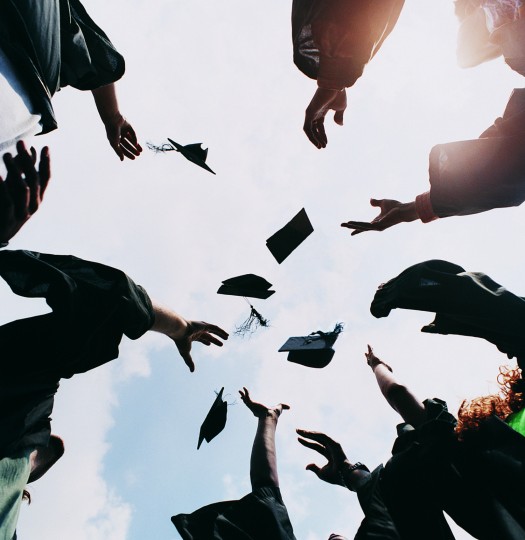 The number of college graduates in a community can boost its economic bottom line.

Most people understand that the more education a person has, the more he or she is likely to earn over a lifetime.

High school dropouts also are more than three times likely to be unemployed than are college graduates, according to statistics from the U.S. Department of Labor.

But what too many people fail to understand is the impact that high school graduation has on their local economy.

Dropping out of high school costs the economy nearly $2 billion in lost tax revenue each year.

Nationally, a 90 percent graduation rate would yield $1.8 billion in local, state and federal taxes based on $5.3 billion in higher wages, according to the Alliance for Excellent Education.

If 90 percent of our nation’s students had finished high school instead of 81 percent in 2013 (the latest data available), state and local governments could be collecting $14 million more in taxes, the education advocates said.

The high school graduation rate is one of 16 benchmark metrics that the Studer Community Institute measures in the Pensacola Metro Dashboard. Developed with the University of West Florida, the dashboard is a snapshot of the educational, economic and social well-being of the community.

In the coming days, the Florida Department of Education will release the 2015 graduation rate for high school students in the state.

In 2014, 66.1 percent of students in Escambia County graduated on time in four years. The graduation rate for students in Santa Rosa was 82.8.

In Florida, students graduate at a rate of 76 percent, compared to 81 percent nationally.

While Escambia’s County’s graduation rate has increased more than 10 percentage points in 10 years, it’s still means that nearly a third of students don’t get a high school diploma.The message should be clear that failure to graduate from high school hurts more than the students and their families.

Cities and towns suffer when unskilled workers without an education can’t find work. They drain from, instead of contribute to, the tax base. Too often they rely on government assistance, suffer from poor health and become a part of the criminal justice pipeline.

The best economic stimulus package is a high school diploma. Addressing the high school graduation issue is a key strategy for economic growth, personal health and a better and more fulfilling life.

School districts are trying to increase graduation rates by adding pre-school and enhancing early education, offering smaller classes in early grades, and focusing on students with the greatest needs, those who are considered disadvantaged or at risk. Community groups are also helping.

In some places the extra work is paying off.

But the real story was in Greenville, S.C., a city on the rise in terms of its economic, educational and social status.

It’s also my hometown, so I spend many years in the Upstate of South Carolina where I finished high school and found employment after college.

Greenville County’s on-time graduation rate climbed for the fourth straight year to 84.2 percent. In 2011, the graduate rate was 72.1 percent and has risen steadily ever year since then, according to state report card data.

The School District made it priority. It reached out to struggling students who were falling behind in reading or math before their ninth grade year to help them catch up.

They put graduation coaches at each high school to identify students who were at risk of dropping out.

They added summer programs to help students who were on the bubble to be able to earn enough credits to graduate before the graduation deadline each summer.

As a result, the graduation rate increased a remarkable nearly 12 percentage points in three years.

Education leaders in Greenville, S.C., began to understand the correlation between graduation rates and economic development. They became partners in education and made investments that have paid dividends for employers.

Currently, Greenville is home to companies such as BMW, GE and Michelin.

As a result, thousands of young professionals have moved to the city and business leaders know that this talented pool of human capital wants — and literally demands — better schools that produce quality graduates.

It’s no accident that Greenville also was listed among the seven best cities to launch a startup in 2016, by Small Business Trends, a website for small businesses and entrepreneurs.

Business and education leaders in Greenville understand the link between a good education system and a strong economy and went to work to make the connection.

Other states also are paying close attention to connection between education and industry.

In neighboring Alabama, business leaders knew if they wanted to snag the economic equivalent of an Airbus passenger jet assembly line every year, they would have to substantially increase the state’s high school graduation rate and maintain educational attainment at that level.

An Auburn University at Montgomery economist painted a clear picture in an analysis of the link between high school graduation and economic development.

Kaivan Deravi figured that raising Alabama’s high school graduation rate to 90 percent would have an economic impact equal to a major industrial project. The rate currently is 80 percent.

This time he analyzed how the state’s economy would benefit from graduation rates reaching the level targeted by Alabama Department o Education’s Plan 2020, which included increasing the number of students who graduate from high school, college and career ready.

— Steady progress toward that goal of 90 percent would bring higher employment, earnings and tax revenue because of rising educational attainment.

— By 2020, if the goal is achieved, the state’s economic output would increase by $430 million as a result of more graduates, and revenues in the Education Trust Fund would grow by $22 million

Improving graduation rates will take serious investments from the entire community, as well as structural changes in the education system.

Investments directed at improving the school readiness of economically disadvantaged children are critical.

Policies have to be implemented to increase the quality of teaching in schools serving high concentrations of poor children so they don’t enter ninth grade without the skills to succeed in high school.

Schools have to offer more workforce and career initiatives that offer a variety of high school options for students, including those that provide a chance for them to gain experience in working and critical connections between the skills they are asked to have and access to jobs that make use of those skills.

It is essential to have a strong link between education and industry. As goes one, so goes the other.

For many of us, increasing the high school graduation rate is a moral imperative, and the economic message is equally compelling.

The sooner we began to understand that inextricable relationship, the sooner we can work on improving our education system and increasing our abysmal graduation.

What role are you playing or can you play in this community to be part of the solution moving forward?