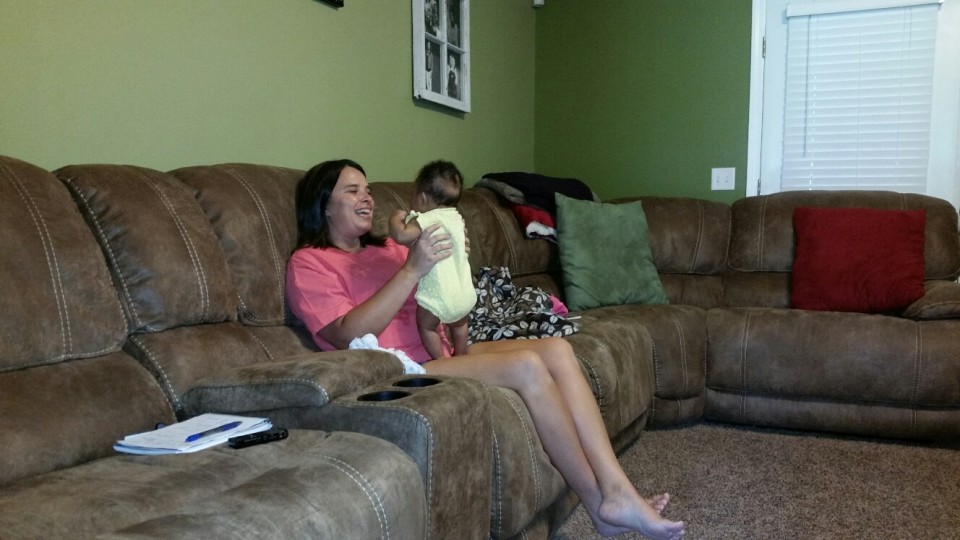 Research shows that children born into poverty hear 30 million fewer words by age 3 than more affluent children, and that can adversely affect them later in life.

If we want children prepared and ready for school from day one, they need to hear millions of words before they first step into a classroom.

“Talk With Me Baby” is a good place to start talking before walking.

The multi-faceted state of Georgia initiative was created to fill the massive 30 million-word gap between children from lower- and upper-income families by making sure that babies from all backgrounds hear many more words.

The Atlantic magazine in September spotlighted the new program that urges new parents to talk to their newborn babies — early and often. Georgia became the first state to take a broad, widespread public-health-focused approach to reducing the word gap.

The state has a lofty goal of reaching all Atlanta-area newborns, regardless of family background or income, by 2017 and all newborns in the state by 2020.

If Talk With Me Baby works, the hope is that every state will adopt the model to reach children early and get them ready for early learning in preschool.

Kindergarten readiness is one of 16 key metrics developed with the University of West Florida to measure the economic, educational and social well-being and quality of life in the Pensacola metro area.

Objective benchmarks are vital to gauging progress and identifying areas that need improvement. The Studer Institute created this dashboard to provide an at-a-glance look at the area’s growth, educational attainment, economic prospects, safety and civic life.

Recent studies show that a big difference between poor and wealthy babies is the number of words they hear before puberty. We can’t afford to wait until our children begin to walk to begin to talk.

The best predictor of a baby’s future success in school is not parental income, level of parent education or ethnicity, but rather the number of words spoken to the baby and the amount of time spend in active engagement from birth to 3 years old.

By the time a poor child reached his first birthday, he likely has already fallen behind middle and upper class children in talking, understanding and learning.

The gulf between the poor children and wealthier ones widens each year, and by high school it has become an ocean.

It’s been a losing battle to close this gap in schools, and a consensus has emerged to do something long before school — even before preschool, perhaps even before birth.

Just as a child needs a certain amount of healthy food for physical growth, that same child also needs a healthy dose of language for brain development.

The good news is, language nutrition is free.

Most parents have the ability to talk, interact and engage with their children in daily encounters and activities. This simply but crucial task is at the heart of Talk With Me Baby strategies.

Research indicates that both quantity and quality of language are essential for vocabulary development, which is an indicator of third-grade reading proficiency. Children who can’t read to learn by the end of third grade are four times likely to drop out of high school.

This is acutely felt in Florida, where 27 percent of children were living in poverty, 5 percent higher than the national average, according to statistics from the U.S. Census Bureau. About 60 percent are eligible for free or reduced-priced meals at school, a key indicator of a community's poverty level.

In “Why Boosting Poor Children’s Vocabulary Is Important for Public Health,” The Atlantic points out that children with more words do better in school. Adults who were good students and earned a college degree have longer life expectancies. They are at lower risk for hypertension, depression and sleep problems. They are less likely to be smokers and to be obese.

The groundbreaking initiative has gotten national attention. The White House put out a “call to action” to reduce the word gap, with the focus on the Georgia program.

We have to make a priority in Florida, and across the nation, as well.

We already know that a third of children who enter kindergarten in Escambia County aren’t prepared for school.

We’ve seen the not-so-coincidental correlation that shows 66 percent of children in Escambia’s VPK programs scored ready to start school, and the same percentage graduate from high school in four years.

We’ve been told over and over again how every child benefits from early learning, whether it’s practiced in a formal school setting or home with parents or caregivers.

Research has consistently shown that the early years in a child’s life — when the human brain is forming — represent a critically important window of opportunity to develop a child’s full potential and shape important academic, social and cognitive skills that determine a child’s success in school and life.

As more research begins to emerge, we’re hearing and learning about the 30 Million Words initiative.

That’s the groundbreaking research at the University of Chicago Medical School to drive awareness of the glaring achievement gap and promote helpful strategies to close it.

Children deprived of heard words have vocabularies that are half the size of their peers by 3, putting them at a distinct advantage before even step in a classroom.

This is what’s called the “word gap,” and it can create serious deficiencies not just in vocabulary size, but also in school readiness, long-term educational and health outcomes, earnings and family stability even decades later.

Of the utmost importance is for parents to spend more time just talking to their babies.

You lose nothing by talking to your children, but you lose a lot more if you don't.