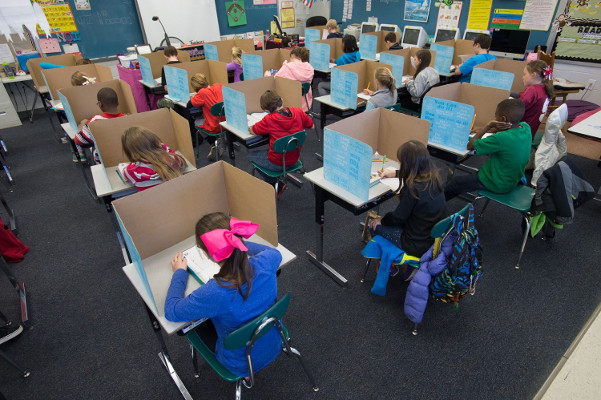 Springtime in Florida means one thing — FCAT. But this year, the Florida Comprehensive Assessment Test — the test used to measure students’ learning gains and to evaluate teacher performance — is not the test it used to be.

As Florida schools turn to the new test, administrators will be left with 16 years of data accumulated in the FCAT era, which was a centerpiece of former Gov. Jeb Bush’s push to reform public schools.

The Studer Community Institute launched this series of stories to look at how Pensacola metro-area schools had fared under that reform effort, the bright spots that were unveiled and the work that remains ahead to help our students, our schools and our community improve.

This is the first of a three-part look at what we found.

How schools have changed since FCAT

When the Florida Comprehensive Assessment Test was used to grade public schools in 1999, the only schools in the state of Florida to earn F’s were in Pensacola’s inner city.

FCAT was a centerpiece of Bush’s plan to increase accountability and reform public education in Florida. That plan included a voucher system that would give parents at “failing” schools tax dollars to spend at a private school of their choice for their child to attend.

Spencer Bibbs closed in 2011 as a public school, when it received a C. Its students were redistricted into other schools. The building now is being converted into a training space for district staff and teachers.

Many other schools have closed or been reconfigured in the FCAT era.

It is important to reiterate that in every case except the charter conversions, each of the closures had all students placed in a superior, more modern, more technologically advanced facility,” said Escambia Superintendent Malcolm Thomas.

“These changes were not related to school grades but rather consolidation and replacement of aging, underutilized facilities.”

In addition to Dixon and Bibbs, here’s how the landscape has changed: 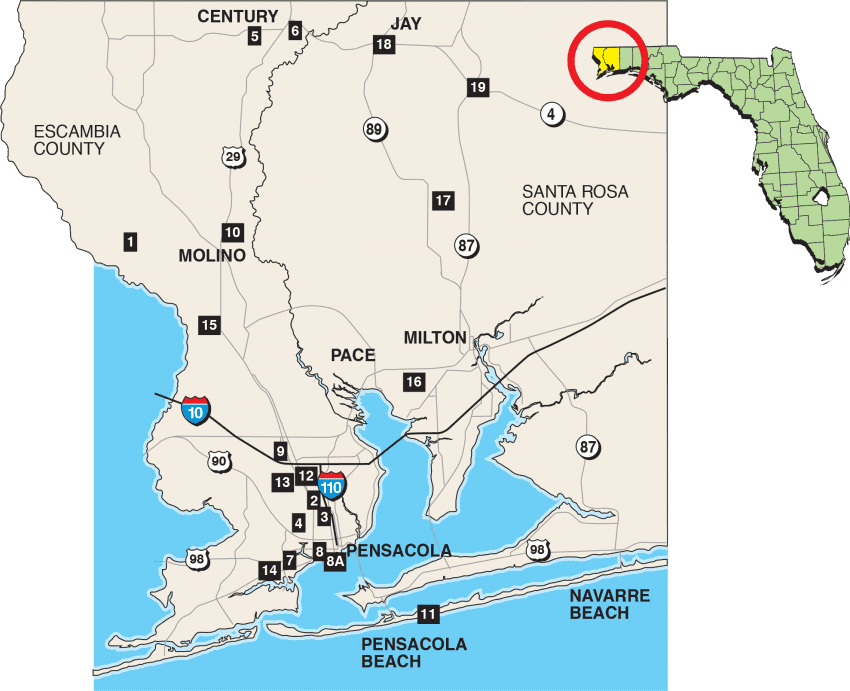 2 Brentwood Middle: Closed as a public school in 2007, when it earned a C. It is now the home of Brown-Barge Middle School.

3 Brown-Barge Middle: Moved from its Fairfield Drive location, which was turned into an overnight storage area for school buses. It was reopened in current location on Hancock Lane.

4 Brownsville Middle: Closed in 2007, when it earned a C. The building is vacant. The district is considering a purchase offer by GSI Recycling, which owns a scrapyard across the street. The same family also owns Scrap Inc., a car crushing facility just behind the scrapyard.

5 Bryneville Elementary: Closed as a public school in 2002, when it earned a D. It was reconstituted as a charter school. It earned an A last year.

7 Edgewater Elementary: Closed in 2009 when it earned a C. The building was sold to S.L. Jones, a private school.

8 Hallmark Elementary: Closed in 2011, when it earned a D, along with Allie Yniestra. The student populations were combined into Global Learning Academy, which earned a C in 2014. The Hallmark building on F Street was bought by developer Matt Pair in 2013.

8a Allie Ynietra: Closed in 2011, when it earned a C. Yniestra’s students were sent to the new Global Learning Academy, which earned a C in 2014. A plan last year to lease the school, on North Q and Jackson streets, to Remnant Church of Deliverance Christian Academy Inc. fell through. It is vacant.

9 Lincoln Park Elementary: Earned a D in 2011, it was nearly closed because of low enrollment. The school was converted to a primary school, serving students in grades K-2. It no longer receives a state grade. Third-, fourth- and fifth-graders were redistricted to various other schools.

10 Molino Elementary: Closed in 2003 when it earned an A. The students were redistricted to the new Molino Park Elementary School. The old building was sold to the county for use as a community center.

13 Wedgewood Middle: Closed as a public school in 2007. The building was turned into a community center.

14 A.V. Clubbs: Closed in 2010 as an alternative middle school. Students were relocated first to E-SEAL, which became Camelot Academy on Patton Road. It serves the E-SEAL and previous Clubbs students.

15 Sid Nelson School: Closed in 2010. The building on Muscogee Road was razed. The property is being used for bus parking. The preschool program and the alternative school programs were relocated to other district schools.

19 Munson Elementary: Closed in 2009, when the school on Munson Highway in Milton earned an A. It is vacant and for sale. Part of it is a community park. Some of it is leased out for reunions, the Blackwater Heritage Festival, training of emergency personnel and other events, said Superintendent Tim Wyrosdick. 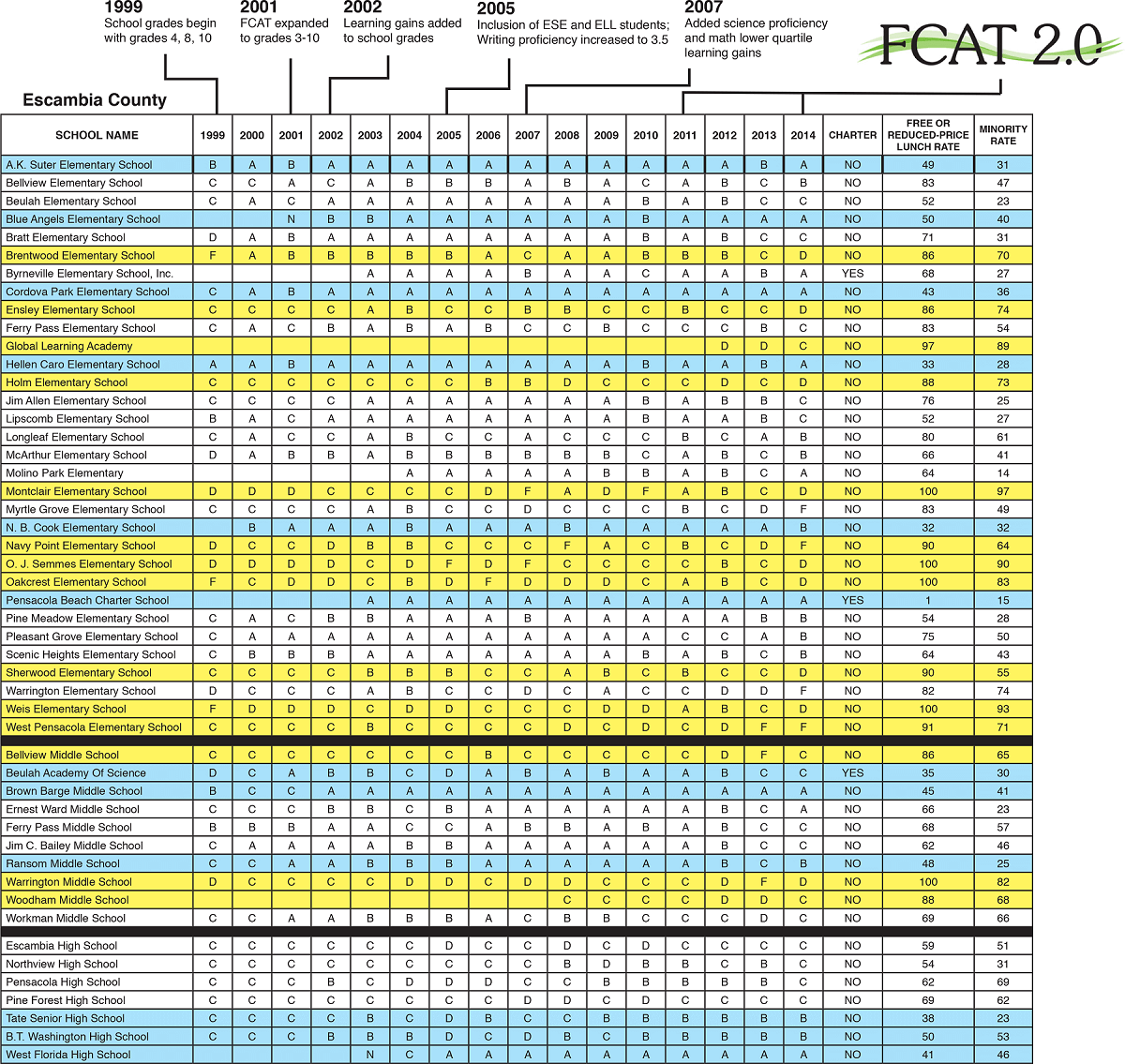 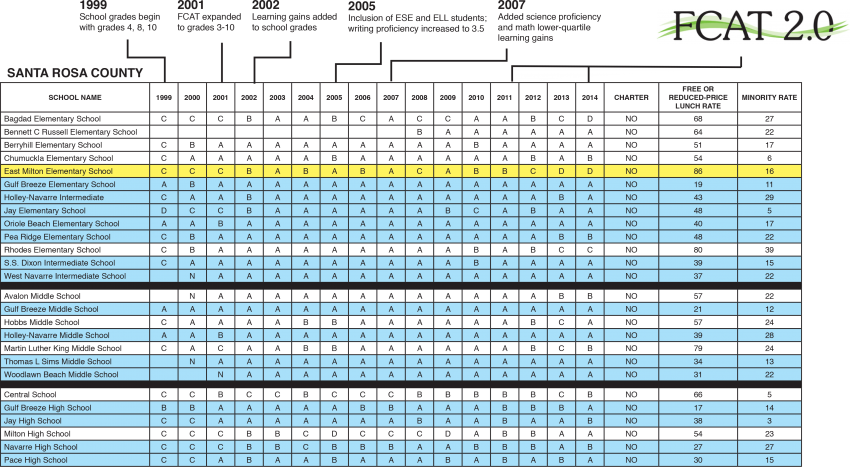 In the beginning, the FCAT evaluated students in grades four, eight and 10. Now students are tested in every grade from three through 10, including reading, math, writing and science.

Over time the test has changed significantly. This chart aims to highlight those changes, as well as track the grades that schools in Escambia and Santa Rosa counties have earned over the years.

Schools whose grades are highlighted in yellow have a poverty rate (as measured by the percentage of students eligible for free or reduced-price lunch) above 85 percent. Those schools typically earn lower grades.

Schools that are highlighted in blue have a poverty rate of 50 percent or below. They earn higher grades.

A private school that receives public tax money to operate. Charter schools may select the students they wish to enroll. Their enrollment population is not bound by geography or attendance zones the way a public school’s is. Charter school students must take the FCAT, a state standardized test.
The percentage of students in the school whose parents’ income level qualifies them for the federal free- or reduced-price lunch program. It is often used as an indicator of the poverty level of a school and the community it serves.
Some schools don’t get a letter grade because the number of students taking the test is too low to report publicly. P means progressing in state education parlance.
The percentage of the student population of a school who are members of an ethnic minority.
The minimum score that the state says a student must make in a subject to be considered proficient and on grade level in the topic. Over time what is considered “proficient” has changed on the FCAT. For example in writing, when the test first began, a score of 3 out 5 was considered proficient. In 2005, a score of 3.5 was needed to be proficient. In 2012 and 2013, proficient required a 4 on a 5-point scale. Also those two years the writing grading sheet, or rubric, was changed to focus more on expository and persuasive writing skills. Reading, math and science also have had scale changes since the beginning.
Exceptional Student Education, or special education.
English Language Learners, or students for whom English is not their first language.
Standardized test scores can be reported in quartiles (quarters). If listed individually, the lower quartile scores fall in the bottom 25 percent.
Measurements of how much progress an individual student has made in a subject from one year to the next. Every student can show a learning gain. But, for example, a student may not earn a score of proficient, but he or she may have increased the score 10 points from the previous year. When learning gains were added to the scoring sheet for FCAT results, schools could get partial credit for students who did make progress (learning gains) even if those students didn’t score at proficiency.
Not every subject is tested by FCAT, thus the creation of the End-of-Course exams to measure what a student has learned in a specific subject. The state provides End-of-Course exams in geometry, algebra, biology and U.S. history. Each of the state’s 67 districts must create its own End-of-Course exams for every other subject area, because teacher evaluations will be based in large part on those exam results. Escambia, for example, has created 150 End-of-Course exams.

Beginning in 2011, the test was revised to FCAT 2.0. That revision included the addition of new subject tests and data points, new calculations to determine what counts as passing, and standards for achieving proficiency at grade level. Here is a list of the changes in calculating student scores and school grades.

Coming Up in Part 2:

In the next edition of Pensacola Metro Report on education, we highlight “bright spots” that are providing a quality education far and near. Hundreds of miles northeast of Pensacola, North Charleston High School in South Carolina has shown some of the highest gains in test scores and graduation rates in the state. With a minority enrollment of 95 percent, and nearly all students eligible for free-or reduced-lunch price meals, North Charleston is shining a bright light in education.

At home, West Florida High School is Escambia County’s only consistent “A”-rated school, with test scores and graduation rates that are higher than all other county high schools. While the School District’s overall graduation rate reached 66 percent last year, West Florida’s graduation rate — at 94 percent — is one of the highest in the U.S.

The Institute’s second edition was released Sunday, Feb. 22, in the Pensacola News Journal.

Coming Up in Part 3:

Experts agree that the key to building a good student is building a strong reader.

Increasingly, research suggests a pivotal time to influence a child’s reading ability is ages 0-3, which is often long before a child enters a classroom.

In the third installment of the Studer Community Institute’s education report, we looked at the growing body of research that supports the importance of early learning, the importance of getting parents involved in the learning process at all ages, and at two programs working now in the Pensacola metro area to help bridge that gap.